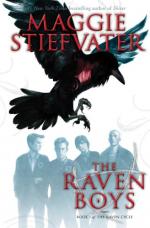 This detailed literature summary also contains Topics for Discussion on The Raven Boys by Maggie Stiefvater.

The Raven Boys is a novel by author Maggie Stiefvater. In this novel, Blue Sargent is the daughter of a clairvoyant. She is the only one in her family that is not a clairvoyant. While Blue is not clairvoyant, she does possess so much energy that her energy magnifies the psychic abilities of her mother, Maura Sargent, her mother's best friends, Calla and Persephone, and Blue's cousin, Orla, that also live in the house. Maura and the other psychics have told Blue all her life that she is destined to kill her one true love when she kisses him. With this in mind, Blue, at sixteen, still has never kissed a boy.

When Blue's half-aunt, a psychic with books and a television show, Neeve, comes to Henrietta, Virginia, Blue questions her mother as to why Neeve is there. It turns out that Neeve is there to help Maura locate Blue's father that left right after she was born. In the meantime, Neeve accompanies Blue to the churchyard on St. Mark's Eve, so that Blue can magnify the spirits that walk through the churchyard for Neeve. Neeve collects the names of the spirits because these are the spirits of those that are to die in the next twelve months.

This time, however, Blue sees the spirit of a boy. It is a boy who identifies himself as Gansey and who wears clothing with the Aglionby Academy raven on it, identifying him as one of the raven boys.

Blue ends up becoming involved with Gansey and some of the other raven boys who are trying to identify the energy lines they believe run through Henrietta. They believe the lines lead to a Welsh king, Glendower, who can grant his finder a favor when he is awakened.