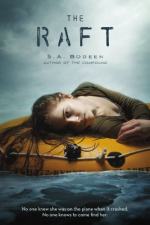 Get The Raft from Amazon.com
View the Study Pack
Study Guide
Order our The Raft Study Guide

S. A. Bodeen
This Study Guide consists of approximately 43 pages of chapter summaries, quotes, character analysis, themes, and more - everything you need to sharpen your knowledge of The Raft.

The Raft Summary & Study Guide includes comprehensive information and analysis to help you understand the book. This study guide contains the following sections:

This detailed literature summary also contains Quotes and a Free Quiz on The Raft by S. A. Bodeen.

In The Raft by S. A. Bodeen, Robie Mitchell is staying with her aunt on Oahu, while taking a break from her life with her parents on Midway Atoll. At fifteen, she’s a little rebellious – getting her nose pierced without her parents’ permission – and wanting more independence. After her aunt is called to Los Angeles for work, Robie convinces her that she cans stay by herself. However, after a man accosts her the first night, Robie wants to go home.

Knowing she’ll be able to take the supply flight to Midway the next night, she tries to reach her parents, but the satellites are down. Shortly after her flight takes off, the plane encounters severe turbulence. Larry, the pilot, attempts to fly ahead of the storm front, but the plane loses an engine and begins to experience hydraulic failure. Larry attempts a controlled crash on the water, which enables Robie and Max (the co-pilot) to escape.

Max helps get Robie out of the water and into the raft. While Max sleeps, Robie left to fend for herself. She reads through an instruction card from Max’s supply bag on what to do in the event of crashing at sea. Robie must contend with hunger, thirst, and the elements, while realizing that her name wasn’t on the plane manifest and no one knows to come look for her.

When the raft begins to take in water, Robie must face her fears of water and sharks to repair the raft. She’s able to drink some rain water and catch a fish for some sustenance. Adrift at sea, Robie continues to fend for herself while Max remains unconscious. Days go by. She begins to hear waves crashing on shore. She arrives on the island and begins to collect lights that have washed ashore in hopes that one will contain enough lighter fluid to start a fire. She encounters a monk seal who has been fatally injured in a shark attack. Watching the seal suffer proves too much, and Robie puts the seal out of its misery. When she sees that a baby seal is nearby, she bonds with the animal.

Realizing that Max is still with her, she’s confused about how he made it onto the island. She looks for food and contemplates the monk seal, but she can’t bring herself to do it. Without rain, she also lacks drinking water. Beginning to feel increasingly weak, she begins to view her situation as dire. As she continues to feel hopeless, she finally acknowledges that Max is a figment of her imagination and that he died on the raft and she dumped his body in the ocean. After locating a Marilyn Monroe lighter, she is able to build a small fire. She falls asleep after giving up hope that she’ll be rescued. In the morning, she wakes to find the fire doused by rain and that she missed the opportunity to drink as well. Then, on the horizon, she thinks she sees a boat. She makes her way to the shore and is rescued.

More summaries and resources for teaching or studying The Raft.

The Raft from BookRags. (c)2022 BookRags, Inc. All rights reserved.