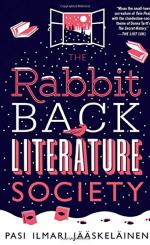 Pasi Ilmari Jääskeläinen
This Study Guide consists of approximately 36 pages of chapter summaries, quotes, character analysis, themes, and more - everything you need to sharpen your knowledge of The Rabbit Back Literature Society.

The Rabbit Back Literature Society Summary & Study Guide includes comprehensive information and analysis to help you understand the book. This study guide contains the following sections:

This detailed literature summary also contains Quotes and a Free Quiz on The Rabbit Back Literature Society by Pasi Ilmari Jääskeläinen.

In a small town in Finland called Rabbit Back, a new substitute teacher named Ella Milana discovers an altered version of the book, "Crime and Punishment," which leads her to a series of myths, mysteries and deceptions. Apparently, an insidious virus is affecting the books in the town and Ella determines to find out what is going on. In the midst of her journey, she learns about an exclusive group called The Rabbit Back Literature Society which was started several years ago. The society is composed of nine people who had been chosen as children by world famous children's author, Laura White. Ms. White had trained the children and they all became famous authors. After reading one of Ella's articles, she is invited to become the tenth member of the group. Ella soon learns, though, that the group is made up more of distrust and jealousy than any real talent or ambition as evidenced through stark declarations of the group's members in a ritual called The Game. Through her participation, Ella learns that there had been another tenth member before her, a child who had mysteriously died years ago. Ella does her best to find out the truth about the boy and the recent sudden disappearance of Laura White.

More summaries and resources for teaching or studying The Rabbit Back Literature Society.

The Rabbit Back Literature Society from BookRags. (c)2022 BookRags, Inc. All rights reserved.