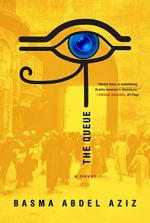 Get The Queue from Amazon.com
View the Study Pack
Study Guide
Order our The Queue Study Guide

Basma Abdel Aziz
This Study Guide consists of approximately 75 pages of chapter summaries, quotes, character analysis, themes, and more - everything you need to sharpen your knowledge of The Queue.

The Queue Summary & Study Guide includes comprehensive information and analysis to help you understand the book. This study guide contains the following sections:

This detailed literature summary also contains Quotes and a Free Quiz on The Queue by Basma Abdel Aziz.

The following version of this book was used to create this study guide: Aziz, Basma Abdel. Translated by Elisabeth Jaquette, Melville House, 2016. Paperback.

In a city wracked by unrest, a deep state called the Gate emerges after a failed uprising, the Disgraceful Events. During the Events, the government Quell Force fired on protestors, injuring and killing many, including Yehya, a curious but uninvolved passerby. Each of The Queue’s six parts opens with a document from Yehya’s medical file, as read by Tarek, the doctor overseeing his case. Sabah, a nurse in Tarek’s hospital, adds Yehya’s symptoms and daily movements to the file on the orders of a Gate official. Tarek agonizes over his decision to leave a harmful bullet in Yehya’s abdomen rather than risk the Gate’s wrath by removing it without a permit.

Yehya and his close friend Nagy join the queue, a permanent line waiting to file applications for certificates and permits with the indefinitely closed Gate. They meet a wide range of people: Ines, a teacher who must apply for the government-issued Certificate of True Citizenship to prove her loyalty to the state; Ehab, a defiant political journalist; Shalaby, a patriotic citizen who wants recognition for his cousin’s heroic death on behalf of the state; and a man in a traditional galabeya, never named, who preaches the sanctity of the ruling party. Yehya’s girlfriend Amani sends a letter warning that a doctor from the state’s Zephyr Hospital is looking for Yehya. Nagy, Yehya and Amani decide to visit Tarek to see what can be done, but Tarek, afraid for his career, insists he cannot operate without a permit. He also denies them Yehya’s x-ray, because the Zephyr doctor had taken it. He lies that they must either find the head nurse of his clinic or go to Zephyr to ask for the state’s copy. Amani declares that she will extract it from Zephyr.

The queue coheres into a community, with customs and social groups. The conservative man in the galabeya meets his symbolic opposition, a short-haired woman who advocates for justice. The coffee shop stops serving the queue, worried about rising unrest in the area, and the cell network drops, leaving most without service for several days. Um Mabrouk, an old family servant of Amani’s, tries to obtain medical care for her sick children. One dies, and Um Mabrouk joins the queue to obtain permits for medicine for the others. She trades favours for precedence in the line, settling near Ines and Shalaby. As Shalaby explains his cousin’s exploits, Ines forcefully argues that if his cousin had killed protestors, he didn’t deserve a martyr’s glory. When Ehab helps the illiterate Um Mabrouk sort her daughter’s medical papers, he realizes she has mistakenly acquired surveillance notes, including a transcription of Ines’ arguments. Um Mabrouk opens a tea and coffee shop and becomes the news, gossip, and community hub. The queue’s stability is interrupted by a second uprising, which takes a large segment of the queue hostage in an attempt to convince the rest to join its cause. Negotiations reach a standstill, and a coalition of bus drivers and captive queue members rise up against their captors, disbanding them. The Gate tightens restrictions, confining radiology equipment to Zephyr Hospital. Yehya learns that Mrs. Alfat, the head nurse from Tarek’s hospital, is somewhere in the queue.

Ehab and Yehya join forces to find Mrs. Alfat. She denies any knowledge of his x-ray and disappears after their second meeting, when Yehya desperately asks her to perform the operation. The Gate updates the law to require a Certificate of True Citizenship even for applications for bullet removal. Yehya begins that paperwork while Ehab publishes an article urging the government to show its support for the victims of the unrest. Meanwhile, Ehab’s research confirms that Violet Telecom is bugging its phones. The short-haired woman leads a boycott against the company, but the Gate distracts the queue with religious exhortations, delivered on the news by the High Sheikh and in the queue by the man in the galabeya. Ines’ paranoia worsens, since she knows her conversation with Shalaby was recorded. She dresses more conservatively and attends prayer meetings. Ehab’s paper stops printing critical articles.

Tarek stops sleeping and Sabah blackmails him about his obsession with Yehya. Amani goes to Zephyr to get Yehya’s x-ray but is apprehended and questioned. When she reacts negatively to the state’s lies about Yehya’s injuries, they arrest her. She is locked in absolute darkness for several days and loses her idealism and sense of agency. Even when she returns to her apartment, she makes no effort to contact her friends. Yehya visits her office and she speaks with him, which gives him hope that she will improve, but he still does not know what happened to her. Shalaby is vindicated when the government announces that the Events were planned by hostile foreign nationals, but days later they recant. Um Mabrouk protects the short-haired woman’s growing activism from the man in the galabeya, but the religious establishment, the Gate, and the man in the galabeya continue to decree that anyone denying the “truth” is treasonous and impious. Ines panics about her former statements and dedicates herself to religious proselytizing. She accepts a marriage proposal from the man in the galabeya and leaves the queue.

Tarek sees in Yehya’s file that his condition is deteriorating and makes contact, though he has no solution yet. Shalaby’s hometown floods and he seeks restitution, only to be blamed for the damage. He goes into a rage and understands that the Gate will never support his efforts. Amani hears and convinces herself of the Gate’s latest explanation of the Events: it was simply an elaborate movie set. Tarek hears the same explanation and is galvanized to act. He plans to operate on Yehya at Nagy’s apartment. He hesitates when he sees that he is now under surveillance too, but steels himself and prepares. As he leaves his office for the last time, he realizes the file is ominously no longer being updated. He adds a sentence and leaves.

More summaries and resources for teaching or studying The Queue.

The Queue from BookRags. (c)2022 BookRags, Inc. All rights reserved.