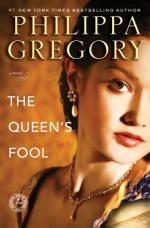 Philippa Gregory
This Study Guide consists of approximately 37 pages of chapter summaries, quotes, character analysis, themes, and more - everything you need to sharpen your knowledge of The Queen's Fool.

This detailed literature summary also contains Topics for Discussion and a Free Quiz on The Queen's Fool by Philippa Gregory.

The Queen's Fool is the story of a young girl, Hannah Green, and her adolescent experiences during the time of Queen Mary's reign. Hannah's family was forced to relocate to England to avoid religious persecution in their homeland (Spain). Hannah's intelligence and education spanned beyond that of the average English woman. She also possessed the gift of holy visions. It was her gift that brought her to the attention of the royal court of England.

Hannah was betrothed to a young man by the name of Daniel Carpenter. Throughout the novel Hannah's love for Daniel blossomed. She also grew to be a woman of fierce independence, which threatened to tear apart their relationship. As the daughter of a widowed father, Hannah was never taught to be submissive nor modest, traits that were essential to the concept of femininity in England at that time. Her life at the court encouraged her to remain outspoken, although outside of the palace the trait was perceived offensively. Hannah found it difficult to resolve the disparities between her upbringing, her life at court, and her future with Daniel.

During her time in royal service, Hannah was regarded as a holy fool and dubbed "Mistress Boy." Hannah served first the Dudley family, then Queen Mary and finally Princess Elizabeth directly. She was present as King Edward passed away and Lady Jane was made Queen. Hannah accompanied Mary as she fought for her chance to inherit the throne and supported her throughout her reign. Despite her love for Queen Mary, Hannah was intrigued by Princess Elizabeth. Elizabeth's methods were unscrupulous, however Hannah admired her many charms.Hannah learned to navigate the perils and politics of court life, while practicing self preservation. Hannah nearly lost her own life at the hands of the Inquisition and again at the Battle of Calais. When Hannah finally exited royal service, she and Daniel embarked on a life together with their son, Danny.