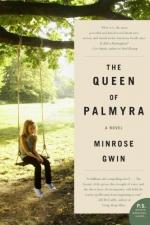 Minrose Gwin
This Study Guide consists of approximately 53 pages of chapter summaries, quotes, character analysis, themes, and more - everything you need to sharpen your knowledge of The Queen of Palmyra.

The Queen of Palmyra Summary & Study Guide includes comprehensive information and analysis to help you understand the book. This study guide contains the following sections:

This detailed literature summary also contains Topics for Discussion on The Queen of Palmyra by Minrose Gwin.

The Queen of Palmyra tells the story of ten-year-old Florence Forrest's coming of age in 1960's Mississippi amidst segregation, racism, and dark family secrets that threaten her definition of right and wrong.

The novel opens in the turbulent 1963 summer in Millwood, Mississippi. Florence Forrest is ten-years-old and proud of the fact that her Daddy entrusts her with fetching "his box" whenever the phone rings. Florence doesn't yet know what's in the box, but she knows it's important. When she's not helping Daddy with the box, Florence sometimes helps Mama in the kitchen baking cakes, or her grandmother's maid, Zenie, with the sewing and ironing. Because her family has moved around a lot, Florence doesn't have any friends her own age and is at least one year behind in school. During the first few weeks of summer, Florence begins noticing strange events in her household. She notices her mother drinking more and her father spending more nights out of the house. There's an obvious tension between her parents, but Florence doesn't yet understand that it's because they have staunchly different views of the way African-Americans should be treated. Her father, the Nighthawk for the KKK, is doing all he can to push the blacks out his neighborhood, while her mother, an integration supporter, does all she can to warn her neighbors of the Klan's attack plans.

A few weeks into the summer, Zenie's niece Eva comes to town with the hopes of selling life insurance policies to the African-Americans in Millwood. She doesn't mind that Florence's father is the main insurance salesman in town, and hopes to flip his black customers into her services. Even though Florence's father is a horrific racist, he still allows Florence to spend time in the black neighborhood, Shake Rag, while he's at work. There, Florence falls in love with the unique, loving people and on many occasions, wishes she was part of their families rather than her own. As the summer passes, life at home becomes increasingly turbulent as Florence's mother begins to drink heavily, dulling the pain of her husband's abusive, violent ways. Many nights, no one bothers to feed or bathe Florence, who basically raises herself with Zenie's occasional assistance. One afternoon, Zenie and Florence make a horrific discovery: Eva has been attacked in the cemetery near their home and someone has branded her face with a cigarette butt. Rather than return home to Raleigh as many Shake Rag residents encourage Eva to do, she remains in Millwood to help fight for civil rights. This attack is a turning point in Florence's life. For the first time, someone she loves is affected by racism, but Florence does not yet know that her father is the culprit. As a result of Eva's attack, Mama slips further and further into her depression and alcoholism, and eventually drives her car into the side of an oncoming train. Miraculously, she survives but is sent to an insane asylum for shock therapy.

The summer carries on with Florence learning more about the KKK. When she accidentally starts a house fire trying to bake cakes for Mama's business, Daddy brands Florence's wrists with his cigarette light to teach her a lesson. Mama returns for a few days but runs away again, leaving Florence behind. By the end of the summer, Florence has greatly matured. She now realizes that Daddy's racist behavior isn't normal, that not all families act this way, and that Mama is a disturbed woman who failed her as a mother. All of these realizations come to boiling point when Florence unwittingly witnesses Daddy murder Eva. At the time, Florence isn't sure what she saw, but as an adult, all the pieces come together in her mind. After the murder, Daddy threatens to kill Florence if she ever reveals the truth. With this final straw, Florence runs away from her childhood home and heads off to New Orleans with Mimi. Florence spends the rest of her life in Louisiana with Mimi and Mama, when she finally returns. Before Hurricane Katrina hits, Florence makes her realization: that she saw Daddy kill Eva, and she finally musters up the courage to confront him about it. Before the hurricane hits, Florence gets in her car and drives into the storm, knowing that Daddy is destined to die in the flood. She intends to sacrifice her life to the storm but at the last moment, jerks her steering wheel to the left, to safety.

More summaries and resources for teaching or studying The Queen of Palmyra.

The Queen of Palmyra from BookRags. (c)2022 BookRags, Inc. All rights reserved.