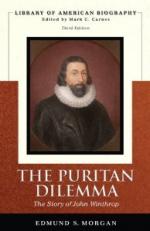 In 1640, the Puritans look outward for the first time. The immigrants with dangerous new ideas stop coming. Now it looks as if the whole people are separatists, content in their own holiness and indifferent to the fact of others. They see the realm of the righteous as very small. But they are not isolationists and begin to condemn the impulse. The deputies remain self-righteous but Winthrop sees self-righteousness destroying charity. So he starts to engage in trade with "sinful" people.

The author then discusses some cases. Winthrop is generally intelligent about his foreign dealings and understands that the holy commission of the Puritans does not require them to make war on foreign evils.

The Puritans are divided by the Civil War; some think revolt against the king sinful, others leave to fight. This is no mere question...

The Puritan Dilemma; the Story of John Winthrop from BookRags. (c)2023 BookRags, Inc. All rights reserved.