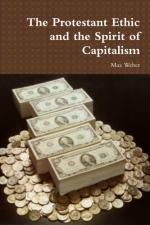 The Protestant Ethic and the Spirit of Capitalism Summary & Study Guide

The Protestant Ethic and the Spirit of Capitalism Summary & Study Guide includes comprehensive information and analysis to help you understand the book. This study guide contains the following sections:

This detailed literature summary also contains Topics for Discussion and a Free Quiz on The Protestant Ethic and the Spirit of Capitalism by Max Weber.

"The Protestant Ethic and the Spirit of Capitalism" by Max Weber, presents the thesis that success of modern capitalism can be attributed to the spirit of capitalism that was borne of the ethics and practices of Protestant asceticism. While the premise initially seems wild and far-fetched, the author is ultimately able to illustrate that his theory has credence and is logical and rational.

In most developed countries, business leaders and owners are Protestant. This book was written in1904 and so some of the arguments may or may not be relevant in modern times. Leaders in capitalism generally came from wealth and had advanced educations. History shows that the majority of the populations of the most economically developed sectors of the sixteenth century adapted to one of the Protestant religions.

The Catholic religion was seen as lax and overly indulgent of the sinner. This assessment led to the Reformation and the rise of Calvinism, which proved to be much more controlling than Catholicism. Prior to the sixteenth and seventeenth centuries, Catholicism was the predominant religion in Europe. It embraced high ideals and other worldliness and was not concerned with materialism or acquisition. There was a lack of ambition among many skilled Catholics who were satisfied to remain in the same status throughout their careers, which was quite a departure from the emerging Protestants who chose to parlay their skills into management and administrative positions.

The rising middle class accepted the overbearing Calvinistic practices and even embraced them. Protestant movements believed that it was God's will that man answer a "calling," which was the worldly role that God preordained for each man. Answering the call was done so only for the glory of God. It was God's will, according to these movements, that man work hard in his calling, not participate in any unlawful or immoral practices and take care of the acquisitions that came his way as a result of his work, including wealth. This mindset set the stage for the "spirit of capitalism," which translated as the traits, characteristics, and practices that were necessary for modern business to be successful.

From Lutheranism and the Reformation through the emerging ascetic movements of Protestantism including Calvinism, Pietism, Methodism, and the Baptist Sects, Weber provides profiles of each of these religions and illustrates how the traits of hard work, work ethic, morality and above all answering the "calling" for God's glory formed the building blocks of modern capitalism. Although Weber makes a strong connection between Protestant asceticism and the spirit of capitalism, he notes that the most advanced economy on earth, the United States, has stripped the pursuit of success and wealth of its religious and ethical meaning and extends a word of caution about a spiritless future.

The Protestant Ethic and the Spirit of Capitalism from BookRags. (c)2022 BookRags, Inc. All rights reserved.