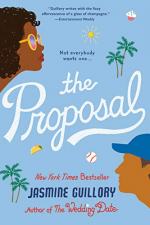 Jasmine Guillory
This Study Guide consists of approximately 39 pages of chapter summaries, quotes, character analysis, themes, and more - everything you need to sharpen your knowledge of The Proposal.

The Proposal Summary & Study Guide includes comprehensive information and analysis to help you understand the book. This study guide contains the following sections:

This detailed literature summary also contains Quotes and a Free Quiz on The Proposal by Jasmine Guillory .

The following version of this book was used to write the guide: Guillory, Jasmine. The Proposal. Penguin Random House, 2018.

In The Proposal, Nik attends a Dodgers Game with her hipster boyfriend of five months, Fisher. Surrounded by thousands of rowdy fans and Fisher's intolerable bros, Nik cannot wait to leave. What she is not expecting is for Fisher to propose to her on the scoreboard halfway through the game. When she refuses, Fisher causes a scene and flees the stadium.

Seeing how uncomfortable Nik looks, two kind strangers, Carlos and his sister Angie, rush to Nik's aid, escorting her into the parking lot. They drive her to her favorite bar to meet her friends Courtney and Dana. To thank them for their help, Nik invites them in. During the hangout, Courtney and Dana observe how much magnetism already exists between Carlos and Nik. After he and Angie leave, they tell her he should be her rebound. Though Nik protests, for days afterwards she cannot stop thinking about him. After finding his email online, she contacts him.

Because Carlos has also been thinking about Nik, he is ecstatic to receive her message. They exchange numbers and make plans to meet up. On their first dinner date, they talk more about Fisher as well as Carlos's work as a doctor. Both realize how much they actually like each other. After dinner, Carlos offers to follow Nik home so she feels safe. Though she feels silly, Fisher's threatening messages have had her worried. Back at the apartment, the two spend several more hours together talking.

Between the end of the night and their next rendezvous, neither Nik nor Carlos can get the other out of their heads. Angie pressures Carlos about Nik and Courtney and Dana beg Nik for details. Both of them remain incapable of voicing how they feel. Not long later, Nik helps Carlos buy books for his cousin Jessie who is on bedrest. Shortly after this act of kindness, Carlos offers to help Nik and Courtney with Courtney's cupcake deliveries, both becoming rapidly invested in one another's personal lives. After the delivery, Nik and Carlos have sex for the first time. While they are both excited by the night, they also worry the other might be reading more into their relationship than they want. For the next few dates they attempt to keep it casual. However, they continue to open up to one another more and more, revealing their past griefs, traumas, and disappointments.

Meanwhile, Nik convinces Courtney and Dana to take a self-defense class with her at Natalie's Gym. Though she has never taken a class here before, Nik is excited by Natalie, the owner and instructor's classroom energy and business approach. When she tells Carlos about it, he suggests she write a piece featuring Natalie's story.

As time passes, Nik eventually decides to tell Carlos she only wants something casual. When he agrees to the arrangement, they are both relieved. This conversation does not alter any of the lovers' interactions. Rather, they seem to spend increasing amounts of time together. Carlos even invites Nik to his home, which he never does, and introduces her to his closest friends.

One night when Jessie's condition suddenly changes while Carlos and Nik are making dinner, the characters are thrown into an emotional crossroads. Carlos rushes to be with his family while Nik agrees to stay home with their enchilada project. Worried about Carlos and his anxious family, Nik eventually decides to surprise them at the hospital with the dinner. Her arrival, however, is not well received by Carlos. As the evening progresses, tensions ease, and Carlos feels comforted by Nik's presence. When Jessie's baby is born safely, the two even cry together. Back at home, they share an intimate evening. The next morning while lying in bed next to a sleeping Nik, Carlos realizes he is in love with her.

When he wakes her to tell her, Nik is shocked and confused. She insists he must not mean what he is saying, and his feelings are only residual from the emotions of the night prior. Furious that Nik seems to undermine everything they have shared over the course of their relationship, Carlos accuses her of using all men to her advantage and storms out.

For days after the breakup, both Nik and Carlos regret what happened, yet neither knows what to do. Angie and Carlos's closest friend Drew, validate his feelings and believe he deserves happiness and love with Nik. Courtney and Dana also tell Nik that she may have reacted poorly and should think about why love scares her so much. Yet it is not until Nik's revealing interview with Natalie and a face-to-face encounter with a nostalgia-inducing container of sour cream that she realizes she also loves Carlos. With Angie's help she stages a faux Dodgers Stadium scene in Carlos's house. When he comes home, he sees she has written I Love You on the TV screen. The two make amends and again profess their love for one another.

More summaries and resources for teaching or studying The Proposal.

The Proposal from BookRags. (c)2022 BookRags, Inc. All rights reserved.