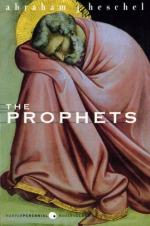 Abraham Joshua Heschel
This Study Guide consists of approximately 27 pages of chapter summaries, quotes, character analysis, themes, and more - everything you need to sharpen your knowledge of The Prophets.

The Prophets Summary & Study Guide includes comprehensive information and analysis to help you understand the book. This study guide contains the following sections:

This detailed literature summary also contains Topics for Discussion and a Free Quiz on The Prophets by Abraham Joshua Heschel.

The Prophets by Abraham J. Heschel is a book written for both Jews and Christians. The author describes the prophetic era in the Old Testament Bible and also gives some details to many of the prophets themselves. In addition Heschel details the driving forces behind the prophets and the reasons why they were different from other followers of God.

Heschel begins his book by discussing the attributes that make a man a prophet. Heschel states that it is a man who feels extreme sensitivity to sin that some people may be indifferent to. The job of the prophet was to magnify the guilt and speak the words of the Lord of Heaven to his people. Heschel described the prophet as a lonely man who often was tormented over his duties to God and felt fiercely for the people whom he was speaking out against because of their evil deeds. He begins looking at Old Testament prophetic books including Amos, Hosea, Isaiah, Jeremiah, and Micah.

Heschel spends time discussing the known past of each of the prophets and the lives that they lived and how it possibly influenced their messages. He also discusses the differences between each of their messages and the similarities. Heschel discusses the history of the prophet and prophecy in the world, both the current world and the ancient. He looks at other religions and makes comparisons between them.

When Heschel looks at chastisement he discusses first the futility of the chastisement and the fact that God used love to direct his people more than he used punishment. The ultimate thing that could be taken away from a person is the freedom that God gives. When God takes away freedom, a person is unable to turn to God and his or her heart is hardened. Heschel ends part one of the book by looking at the justice problem in the land at the time of the prophets. It wasn't that there weren't any laws or any judges, but that they were corrupt and lacked righteousness.

Heschel devotes the second part of the book to the discussion of pathos and ecstasy in relationship to the prophets. He discusses other parts of the world and religions that use ecstasy and how they are different from the prophets in the Old Testament and the ways in which we can asses the validity of their messages. Heschel gives a lot of information in these chapters. He also takes a look at the connection between the leaders of the land, kings, and princess, and the religious leaders, priests, and prophets. Often there was a direct link between the two, and Heschel spends time pointing out the reasons and the problems with this. While the intentions were often pure, they defiled the law of the religion because of their love for their country. This is one of the reasons why it was necessary that God raise up a prophet to come and speak out against the land.

Heschel ends the book discussing God and the relationship that he has with his people. He also contrasts this to the other deities found in history that didn't have a relationship with their subjects. Heschel explains at the end of the book that it is important to first understand God if a person wants to understand themselves.

More summaries and resources for teaching or studying The Prophets.

The Prophets from BookRags. (c)2022 BookRags, Inc. All rights reserved.