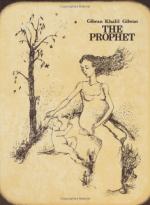 Khalil Gibran
This Study Guide consists of approximately 30 pages of chapter summaries, quotes, character analysis, themes, and more - everything you need to sharpen your knowledge of The Prophet.

The Prophet Summary & Study Guide includes comprehensive information and analysis to help you understand the book. This study guide contains the following sections:

This detailed literature summary also contains Topics for Discussion and a Free Quiz on The Prophet by Khalil Gibran.

The Prophet presents the farewell observations on and recommendations about life and death of Almustafa, the chosen and beloved Prophet, as he ends a twelve-year sojourn in Orphalese.

Almustafa, the chosen and beloved Prophet around whom the story revolves, has spent twelve years of his youth in Orphalese, serving as the people's harp, flame, seeker of silence and guardian of the night. Much of his time has been spent in the overlooking hills, watching and listening to their lives. The people have generously met Almustafa's physical needs, but he realizes that some have criticized his aloofness. Now the ship he has been watching for to take him home arrives, and Almustafa comes down from the hills to the temple, bittersweet about leaving. The people gather to see him off, hungry to imbibe whatever wisdom he can deliver, for posterity's sake.

In the temple and on the prompting of the seer Almitra, who believes in him, a tongue-tied and emotional Almustafa agrees to respond to questions about what separates birth and death. Almitra opens the question-and-answer session, and the responses inspire others to seek guidance about things close to their hearts. Almustafa's responses are all delivered to the whole citizenry of Orphalese, but each is also tailored to the individual questioner, the sincere and the cynical.

There are twenty-six questions regarding various aspects of life. Addressing each question individually, Almustafa exhibits a general tendency to show, through allusions to nature and everyday activities, the interrelatedness of life. He rejects many of the formalities and restrictions characterizing such human institutions as law and religion. He dismisses common views about marriage dissolving the spouses' individuality, molding children to the parents' preconceived ideas about their futures and prayer being about intercession in time of need, want or sorrow. Nudity, a significant taboo among all the peoples of the Middle East, is used several times as a symbol for natural purity and to question formalized views on morality. Generosity can result in good or evil, depending on the motivations of the giver and the receiver. Many aspects of life are seen as two sides of a single coin. Almustafa urges the people to see even in life's negative aspects some spark of good, and he urges the people, young, old and middle-aged, rich and poor, male and female, to appreciate the unity of life under God and behave accordingly.

As evening falls, Almitra signals that the interchange has ended by blessing the day, the city and Almustafa's sage words. He objects that he has drawn from them more than he has provided. The crowd follows Almustafa tearfully to the docks, where he delivers a moving and lengthy farewell oration, thanking and encouraging the people he has loved and tried to serve, justifying his methods and urging them to seek excellence in all things and wait patiently for the hidden things in life to be fully revealed. Almustafa remains encouraging, challenging, hopeful and - above all - enigmatic to the end, promising, "A little while, a moment of rest upon the wind, and another woman shall bear me," words Almitra takes to heart as she alone remains to watch the empty sea.

More summaries and resources for teaching or studying The Prophet.

The Prophet from BookRags. (c)2022 BookRags, Inc. All rights reserved.