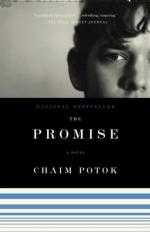 The Promise Summary & Study Guide includes comprehensive information and analysis to help you understand the book. This study guide contains the following sections:

This detailed literature summary also contains Topics for Discussion and a Free Quiz on The Promise by Chaim Potok.

Chaim Potok wrote The Promise in 1969 as a sequel to his previous novel The Chosen. The two main characters of the previous novel are Reuven Malter, an Orthodox Jew in the process of becoming a rabbi and his childhood friend Daniel Saunders, a Hasidic Jew who broke tradition by becoming a psychologist rather than following in his father's footsteps as a Rebbe. The Promise expands on this relationship and introduces others, all against the backdrop of a flood of Orthodox Jews coming to America after World War II to rebuild their lives.

There are two major conflicts within The Promise. First, Reuven finds himself torn between two worlds, a modern world and that of his traditional religion. His studies in school are pushing him towards orthodoxy. He has an incredibly rigid, fundamentalist teacher named Rav Jacob Kalman, who survived the Holocaust and now teaches Talmud at Hirsch University.

Kalman is incredibly orthodox and is highly suspicious of Reuven's father's method of historical criticism of the Talmud. He is far more suspicious and even openly hostile to Professor Abraham Gordon, a liberal professor of Judaism famous for his attempts to reconcile modern Jewish theology with modernity. Reuven finds himself trapped between two worlds as a result.

The second conflict occurs within the heart of Michael Gordon, the son of Abraham and Ruth Gordon and the nephew of Rachel Gordon, Reuven and Danny's love interest. Michael is fourteen years old, precocious, and very disturbed. He breaks out into fits of rage for no apparent reason. Michael hates orthodox Jews for their fierce criticism of his father and eventually must be checked into treatment, and for a long time he does very poorly there. Danny is his psychologist who works night and day to find a way to resolve Michael's internal turmoil.

The Promise is divided into three books, each of which mark out a major stage in both Reuven and Michael's conflicts, which appear to mirror one another. In Book One, both characters (along with all the others) are introduced. Their conflicts are revealed and the book ends with Reuven trapped between two worlds and Michael entering treatment at Danny's mental facility.

Book Two is a long and steady examination of the nature of both conflicts and expands upon the tension within both Reuven and Michael. Reuven is increasingly pressured to choose between his traditional faith and modernity. Michael is increasingly defiant in his treatment, and his behavior continues to baffle his family, Reuven and Danny. Reuven's encounters with Rav Kalman grow increasingly strained and Reuven struggles over what decision he will make.

In Book Three, the conflicts are both resolved. In the case of Reuven, he eventually decides to receive smicha from his university and become a rabbi, but he asserts his right to use his father's historical critical methods. In this way, he embraces his tradition while reserving the right to criticize it, thus refusing to have a choice between the two worlds forced upon him.

Michael's conflict is also resolved when he realizes that he hates his father and mother for forcing him to withstand the criticisms that his father endures for his work. Reuven also realizes that he resents everyone who forced him to choose between his two worlds because they did so thinking only of themselves. In the end, both Michael and Reuven assert their individuality, which has been repressed by the choices their families impose upon them.

The Promise from BookRags. (c)2022 BookRags, Inc. All rights reserved.