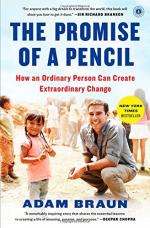 The Promise of a Pencil Summary & Study Guide

Adam Braun
This Study Guide consists of approximately 35 pages of chapter summaries, quotes, character analysis, themes, and more - everything you need to sharpen your knowledge of The Promise of a Pencil.

The Promise of a Pencil Summary & Study Guide Description

The Promise of a Pencil Summary & Study Guide includes comprehensive information and analysis to help you understand the book. This study guide contains the following sections:

This detailed literature summary also contains Topics for Discussion on The Promise of a Pencil by Adam Braun.

Adam Braun was born into a life of privilege. His father was a dentist and his mother an orthodontist. He lived in a neighborhood of CEOs, doctors, lawyers and wealthy investment bankers. His father, Ervin, was a coach and disciplinarian and instilled the goals of being successful and hardworking in his children but told them to always be charitable and think of others who were less fortunate.

Adam played basketball in high school. He met two young men from Mozambique, Sam and Cornelio, who earned a scholarship to play high school basketball in the United States. But their accommodations in Philadelphia were deplorable and their high school experience was a disappointment. Adam’s parents agreed to become their legal guardians and allow them to live with them while they were in school as long as Adam agreed to tutor them. Adam and the two boys from another world became friends. Knowing them and hearing about the struggles of life in Mozambique opened up Adam’s eyes to the rest of the world. He realized that he had been insulated in his upscale existence and began to think about how the rest of the world lived.

After graduating from Brown University, Adam pursued his dream of becoming a hedge fund manager or investment banker. He landed on Wall Street at Bain Capital with a goal of making a real killing and attaining it in just a few years. He signed up for a Semester at Sea (SAS) which allowed him to travel to remote areas in Asia and Africa where he encountered poor kids who had no future. There were virtually no schools and nothing for the kids to look forward to. When asking the kids what they would want more than anything in the world he got responses like “a book” or “to dance.” He was blown away. Adam was a goner when a little boy’s face lit up when he handed him a pencil.

Adam spent the next few years balancing his time between his challenging job on Wall Street and establishing a nonprofit organization with a mission of building schools in third world countries. He was able to get friends and associates involved on a volunteer basis and funded his pursuit with donations and investments. Over the years as the organization and demands for schools grew, Adam had to make a choice. He decided to listen to his head but follow his heart. He could not get the image of the little boy and the pencil out of his head. Pencils of Promise became Adam’s full-time pursuit and at last count, PoP had built 100 schools around the world followed by Adam’s announcement of a new goal of 500 schools.

More summaries and resources for teaching or studying The Promise of a Pencil.

The Promise of a Pencil from BookRags. (c)2022 BookRags, Inc. All rights reserved.