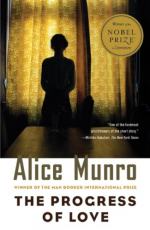 Alice Munro
This Study Guide consists of approximately 25 pages of chapter summaries, quotes, character analysis, themes, and more - everything you need to sharpen your knowledge of The Progress of Love.

This detailed literature summary also contains Quotes and a Free Quiz on The Progress of Love (short story) by Alice Munro.

The following version of this story was used to create this study guide: Munro, Alice. “The Progress of Love.” Selected Stories. New York: Vintage Books, 1997. 219-240. Print.

The story takes place in rural Canada and opens on the narrator, Euphemia, who is divorced, works in a real estate office, and is the mother of two sons. She was born in the 1930s. One day, she receives a call from her father, who informs her that her mother has died. Euphemia’s mother was a devout Christian who married at the age of 25. Euphemia’s father worked as a farmer; he inherited the farm from his parents. As a young adolescent, Euphemia was excited by the prospect of attending high school, but her parents forbade her, instead demanding that she stay home and help around the house until she became married.

Euphemia’s mother was named Marietta. As a child, Marietta lived in a small Canadian town called Ramsay. She lived with her parents and her younger sister Beryl. Her father was employed doing administrative work for a lumber mill. Marietta experienced much anxiety over the fallout of her parents’ dysfunctional relationship. She eventually developed a lifelong grudge against her father. One day, Marietta’s mother tied a noose around her neck and threatened to hang herself to spite her husband. The experience was very traumatizing for Marietta.

In the summer of 1947, Marietta’s sister Beryl came to visit Marietta and her family. Beryl had moved to California years ago and had become the owner of a typing and bookkeeping business. When she visited, she arrived with her boyfriend, Mr. Florence, who at first seemed rather brusque and unmannerly to Marietta and Euphemia. Euphemia gave Beryl a tour of the farm, and Beryl found it all strange and fascinating. This reaction from Beryl made Euphemia feel somewhat embarrassed. At night, Euphemia witnessed Beryl’s complex beauty regimens and found them very interesting. One night, Beryl and Mr. Florence took Euphemia and her parents to a nice restaurant. Euphemia’s parents felt rather out of place in those surroundings.

During the meal, Beryl told the anecdote about her mother threatening to hang herself. She viewed the incident with far more levity and humor than Marietta did, as Beryl viewed the threat as nothing more than an unfortunately tasteless joke on their mother’s part. On the way home from the meal, Beryl asked Marietta how she invested her half of the inheritance money they received from their father. Marietta informed Beryl that she had burned her half of the money because of the resentment she still held towards him. Beryl was astonished and angry to hear this.

Euphemia’s parents sold the farm in the 1960s, and it went up for sale again years later. By that time, Euphemia had run away from home, lived in town and worked as a waitress, attended night classes for typing and bookkeeping, and found a job working in a real estate office. She visited her childhood home with her boyfriend at the time, Bob Marks. While in the house, she reflected on how she had rejected many of her parents values in the course of her life. She reflected on Marietta’s grudge towards her father and thought about the importance of kindness and reconciliation.

More summaries and resources for teaching or studying The Progress of Love (short story).