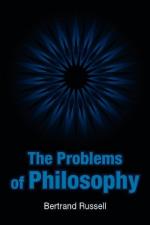 Bertrand Russell
This Study Guide consists of approximately 25 pages of chapter summaries, quotes, character analysis, themes, and more - everything you need to sharpen your knowledge of The Problems of Philosophy.

The Problems of Philosophy Summary & Study Guide includes comprehensive information and analysis to help you understand the book. This study guide contains the following sections:

This detailed literature summary also contains Topics for Discussion on The Problems of Philosophy by Bertrand Russell.

Russell does not address all of the problems of philosophy; instead, he focuses on those fundamental questions on which Russell believed he could say something positive and constructive. Thus, he gives his own views and criticizes others. The result of this strategy means that Russell focuses more on epistemology, the study of knowledge, and less on metaphysics, the theory of what exists.

Russell's writings extend over seven decades and The Problems of Philosophy was originally written in 1912; however, it was reprinted throughout Russell's life and thereafter. It contains, as a result, his system of logical atomism, which follows his allegiance to British Hegelianism and pre-dates his future influences, such as his infamous encounters with Ludwig Wittgenstein. Russell changed his views on many matters, and quite often. Thus, it is important for the reader to understand that the views Russell defends here are only a snapshot of his philosophical views.

The book is divided into fifteen chapters. The first chapter, "Appearance and Reality" distinguishes between what appears to us, sensations, and reality, the furniture of the world and the sense-data that is produced by them. Chapter II, "The Existence of Matter" gives an argument for the existence of matter from the evidence presented to us of it by the senses. Chapter III, "The Nature of Matter" tries to describe the nature of matter as opposed to the realm of mental entities and the realm of abstract ideas.

Chapter IV addresses and criticizes the previously dominant philosophy of Idealism and Chapter V makes the—crucial for Russell—distinction between knowledge by acquaintance and knowledge by description. Chapter VI explains the nature of induction and Chapter VII gives a theory for how we come to know general principles. Chapter VIII explains how a priori knowledge—or knowledge derived apart from experience—is possible.

Chapter IX explains the world of universals—or the abstract objects that correspond to our "type" terms in language, such as whiteness, horsehood, and so on. Chapter X explains how we can know about universals and Chapter XI analyzes the notion of "intuitive" knowledge or knowledge that is self-evidently known. Chapter XII addresses Russell's correspondence theory of truth, while Chapter XIII distinguishes between knowledge, error and probable opinion.

Chapter XIV argues that philosophical knowledge has limits and that without experience, it cannot say much about the nature of the world. Chapter XV argues that philosophy is, despite its inability to produce certainty about its subject matter, still of profound value. Thus Russell spends most of his book introducing perennial philosophical questions, criticizing popular answers and giving his own view. The penultimate chapter explains the limits of this practice and the final chapter explains its benefits.

More summaries and resources for teaching or studying The Problems of Philosophy.

The Problems of Philosophy from BookRags. (c)2022 BookRags, Inc. All rights reserved.