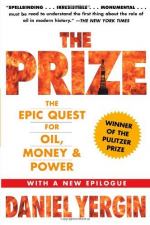 The Prize: The Epic Quest for Oil, Money, and Power Topics for Discussion

Daniel Yergin
This Study Guide consists of approximately 136 pages of chapter summaries, quotes, character analysis, themes, and more - everything you need to sharpen your knowledge of The Prize.

How did the U.S. attitude towards big business set it aside from the rest of the world?

How might oil have changed the course of the two world wars?

How well have oil embargoes succeeded and how have they failed; that is, how potent is the "oil weapon"?

How has oil technology affected traditional societies in Libya, Saudi Arabia, and Iran?

How did OPEC change the world?

Why was the Suez Canal worth going to war over in 1956? Would it still be?

Has oil more clearly brought out humanity's good or evil side?

More summaries and resources for teaching or studying The Prize: The Epic Quest for Oil, Money, and Power.

The Prize: The Epic Quest for Oil, Money, and Power from BookRags. (c)2022 BookRags, Inc. All rights reserved.