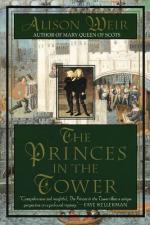 Plot Summary
+Chapters Summary and Analysis
Chapters 1-2, Richard III and the Chroniclers, The Sanctuary Child
Chapters 3-4, Richard of Gloucester, Clarence and the Wydvilles
Chapters 5-6, Deadly Feuds and Factions, Those of the Queen's Blood
Chapters 7-8, An Innocent Lamb in the Hands of Wolves, The Lord Protector
Chapters 9-10, The Fall of Hastings, This Act of Usurpation
Chapters 11-12, Richard III, Conspiracies
Chapters 13-14, The Princes in the Tower, The Wicked Uncle
Chapters 15-16, Rebellion, An Especial Good Lord
Chapters 17-18, An Incestuous Passion, A Dark Prince
Chapters 19-21, Pretenders, Tyrell's Confession, The Skeletons in the Tower
Free Quiz
Characters
Objects/Places
Themes
Style
Quotes
Topics for Discussion
Order our The Princes in the Tower Study Guide

The Princes in the Tower Summary & Study Guide

Alison Weir (historian)
This Study Guide consists of approximately 29 pages of chapter summaries, quotes, character analysis, themes, and more - everything you need to sharpen your knowledge of The Princes in the Tower.

The Princes in the Tower Summary & Study Guide Description

The Princes in the Tower Summary & Study Guide includes comprehensive information and analysis to help you understand the book. This study guide contains the following sections:

This detailed literature summary also contains Topics for Discussion and a Free Quiz on The Princes in the Tower by Alison Weir (historian).

Alison Weir is an important popular historian who has written a number of historical books concerning 15th and 16th British monarchs and their associated families, heirs, rivals and court. Her books cover the lives of Henry VIII, Elizabeth I and Eleanor Aquitaine, along with the controversy surrounding the famed story of the Princes in the Tower.

The story begins with King Edward IV, the king of England from 1461 until his death in 1483, interrupted only by the Wars of the Roses, which was a series of conflicts between the House of York and the House Lancaster. Edward had his only rival, Henry VI, killed and maintained the throne until his death. However, Edward's family was full of factions that threatened to erupt after his own death. For one, Edward had married into a lower class family known as the Wydvilles, who were eager to increase their power and who were widely despised. Edward also had two brothers, Clarence and Richard, who were potential competition. Clarence challenged Edward for the throne but lost and was executed. Richard ruled safely in the North until Edward's death.

When Edward died, the Wydvilles and Richard warred over the throne. The next in line to be king was Edward IV's son, Edward V. Following him was his brother the Duke of York. The Wydville family intended to rise to power after Edward died but the Edward IV's final will provided that Richard would be Edward V's Lord Protector until his age of majority.

While the Wydvilles tried to stop Richard from taking office as Lord Protector, Richard was ultimately successful, repelling the Wydvilles and crushing his rivals. However, he quickly displayed his intention to become King despite Edward V and the Duke of York. He used his allies to neutralize all his rivals and imprison Edward V and Richard, the Duke of York. Richard then argued that Edward IV's marriage to Elizabeth Wydville was illegitimate and that he was therefore next in line for the throne. Through intimidation and threats, Richard forced parliament to comply, making him King Richard III.

Richard III had the Princes imprisoned in the London Tower, hoping to prevent their escape and a war of succession. There is a controversy over what happened next. Many believe that Richard had his servants murder the Princes in the Tower and hide their bodies. The rumor was widely believed at the time and led Richard to lose his allies. Consequently, Richard III was overthrown by Henry Tudor, establishing the Tudor line in England which would change the course of history. Weir's book is an extended and well-documented attempt to combat those who would challenge Richard III's guilt. Through her extensive use of historical sources, Weir forcefully argues that Richard III was almost certainly the killer. However, readers should be aware that Weir is a popular historian and that if one is looking for a careful academic history of the controversy surrounding the Princes in the Tower, they should look to other sources.

More summaries and resources for teaching or studying The Princes in the Tower.

The Princes in the Tower from BookRags. (c)2022 BookRags, Inc. All rights reserved.