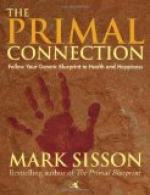 The Primal Connection: Follow Your Genetic Blueprint to Health and Happiness - A Recipe for Success Summary & Analysis

Mark Sisson
This Study Guide consists of approximately 26 pages of chapter summaries, quotes, character analysis, themes, and more - everything you need to sharpen your knowledge of The Primal Connection: Follow Your Genetic Blueprint to Health and Happiness.

A Recipe for Success Summary and Analysis

Summary. "Feel good" hormones are the hard-wired reward humans get for doing things that are good for their well-being. Doing what's healthy advances evolution. Modern humans are genetically identical to their hunter-gatherer ancestors, so this behavior is universal. However, the environment has changed. The scarcity that marked human ancestors' lives has been replaced with overabundance. So instead of risking being eaten by animals or starving, people are faced with getting "feel good" hormones by doing things that are artificial or excessive.

Humans are wired to seek pleasure, which can be acquired by eating good food, having sex, going out in nature, sleeping well and having healthy relationships. Actions that help survival also cause happy hormone boosts and neuro-chemicals.

Humans bear millions of years of evolutionary design. Much of human psychology has its root in evolutionary...

(read more from the A Recipe for Success Summary)

More summaries and resources for teaching or studying The Primal Connection: Follow Your Genetic Blueprint to Health and Happiness.

The Primal Connection: Follow Your Genetic Blueprint to Health and Happiness from Gale. ©2005-2006 Thomson Gale, a part of the Thomson Corporation. All rights reserved.