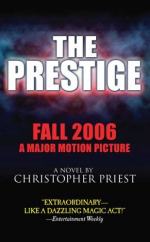 Christopher Priest (novelist)
This Study Guide consists of approximately 39 pages of chapter summaries, quotes, character analysis, themes, and more - everything you need to sharpen your knowledge of The Prestige.

The Prestige Summary & Study Guide includes comprehensive information and analysis to help you understand the book. This study guide contains the following sections:

This detailed literature summary also contains Topics for Discussion on The Prestige by Christopher Priest (novelist).

The Prestige by Christopher Priest is a novel written partially as a narrative and partially in an epistolary style. Andrew Westley and Lady Katherine Angier unite to discover the secrets surrounding the feud between their ancestors. The Prestige is an engaging tale that is very enjoyable to read.

Andrew Westley is sent on an assignment the day that he receives a book from his father that shows a connection to Andrew's birth parents in that it was written by a man who shares the same last name as Andrew's birth name. Andrew is pulled into a mystery of a past feud that took place between his great-grandfather, Alfred Borden, and a man named Rupert Angier. Both men were rival magicians throughout their lives and careers. Andrew's only concern is that of a twin brother who he believes he has whom he longs to connect with. His twin is out in the world somewhere. In order for Andrew to follow along with this rivalry, the book is opened and takes over as the narrative to the reader with the entries that are placed within in regards to Alfred Borden's life. His childhood is briefly described, and then he proceeds by examining his life as an illusionist. His explains his secrets are to be guarded, and yet, he longs to reveal them.

Alfred tells the tale of how his rivalry with Rupert Angier began as he struck the first blow by trying to humiliate the man during a séance by showing his tricks to the grieving family and how this was taken by Angier. The rivalry is kept alive and, in turn, each man was plagued by the other from then on in their lives and careers. He evades revealing his secret to his own most famous act, the New Transported Man, but reveals that this in fact an illusion. Alfred Borden takes the reader through a series of techniques and illusions that are commonly practiced by magicians and through the tale of how his life has progressed to this point in time. The journal also covers the personal aspects of Borden's life, including his wife, children, and his mistress.

Simultaneously, Angier's journal reveals that the blow that sparked the rivalry was that during the séance, injury was done to his wife that lead to the loss of their child. This journal also reveals a great deal of regrets on his part in the attacks that the men pit against each other.

Kate and Andrew try to uncover the death of a young boy in Kate's family home and are using both journals from their great grandfathers in order to discover the mystery that has held Kate in guilt for over two decades, and simultaneously, they try to discover if the boy was the mysterious twin brother that Andrew believes he once had. Throughout the tale, they read the accounts of both men's journals in order to discover what may have caused the tragedy of the young boy, and along the path, they learn the secrets of both men's lives and each man's rationale behind their feud.

The Prestige from BookRags. (c)2022 BookRags, Inc. All rights reserved.