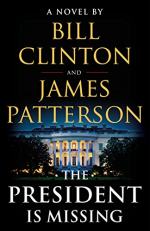 The President Is Missing Summary & Study Guide includes comprehensive information and analysis to help you understand the book. This study guide contains the following sections:

This detailed literature summary also contains Quotes and a Free Quiz on The President Is Missing by Bill Clinton and James Patterson.

The following version of the novel was used to create this study guide: Patterson, James and Clinton, Bill. The President is Missing. Little, Brown and Company. June 4, 2018.

The President is Missing by James Patterson and Bill Clinton describes an America in which playing politics has become more important than being patriotic. In the midst of wondering who he can trust with highly classified information about a terrorist threat, President Jonathon Lincoln Duncan must rise above the politics to save the country he loves.

Duncan faces an impeachment hearing based on a call he made to Suliman Cindoruk, an internationally known terrorist, as well as Duncan's interference in another country’s plan to kill Suliman. Because this matter of national security requires secrecy, Duncan cannot fully explain himself to the members of the House Select Committee who will be questioning him. Duncan meets with the Speaker of the House Lester Rhodes and attempts to make him understand that he needs Suliman alive to help stop a potential cyberterrorism attack against America. Instead of trusting the president and allowing him the leeway to protect the country, Rhodes refuses to work with Duncan.

Meanwhile, Duncan meets Nina, a woman who claims to know something about the terrorist threat, in the Oval Office of the White House. She passes him an envelope containing the location of a place where he is to meet her partner. It is indicated that he is to arrive at the location alone with no security detail. Although Duncan’s chief of staff and head of security argue that it is not wise for him to go alone, Duncan goes against their wishes.

Duncan meets Augie, the man who works with Nina at Nationals Park. After talking for a short while, Augie asks Duncan to follow him. Still unsure if he can trust Augie or not, Duncan follows Augie outside the stadium. When the step outside the gates, the electricity suddenly goes off and Augie rushes Duncan toward a van Nina is driving. Shots are fired and Nina is killed. Even though Duncan had insisted Secret Service agents not follow him, these agents appear from nowhere and attempt to whisk Duncan and Augie to safety. The Secret Service vehicles are shot at again on the 14th Street Bridge where Duncan is forced to flee with Augie in a separate vehicle.

After Duncan arrives at the Blue House, he is able to piece together information from Augie that he and Nina were trying to warn the United States of a virus and wanted to help them stop it before it damaged America’s Internet infrastructure. Duncan quickly pulls together a meeting with Israeli, German, and Russian leaders at a secluded cabin in Virginia to try to figure out who might be behind the attack on America. Gathered also at the cabin are the best of computer technicians tasked with recreating and learning how to defuse the virus.

Amid the rush to stop the virus, Duncan knows there is a traitor among his six closest aides. Nina and Augie both knew the code word Dark Ages and used it to get the president’s attention. Only six people closest to him knew this code word. Augie claims not to know the identity of Nina’s source at the White House.

Believing they have found a way to trick the virus, the computer techs activate it. They are shocked when the virus starts overwriting files but then relieved when it stops and a password prompt appears. Knowing the person who was working with Nina knew the password, Duncan is able to trick his chief of staff, the woman he believed was most trustworthy into unknowingly admitting that she is the traitor. Not only is Duncan able to weed out the traitor under his leadership, Duncan has also managed to help stop a major attack of cyberterrorism that would have returned America to pre-computer times, possibly turning it into a third world country. Duncan’s approval ratings soar and he is able to avoid impeachment. He uses his newfound popularity to encourage Americans to work together for a common good instead of fighting against one another.