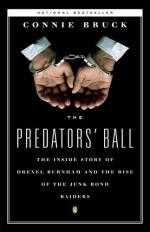 Connie Bruck
This Study Guide consists of approximately 49 pages of chapter summaries, quotes, character analysis, themes, and more - everything you need to sharpen your knowledge of The Predators' Ball.

This detailed literature summary also contains Topics for Discussion and a Free Quiz on The Predators' Ball by Connie Bruck.

The Predators' Ball by Connie Bruck is the fascinating story of Michael Milken who became known as the Junk bond King and eventually was brought down by charges under the RICO act. Milken and his wife both grew up in Southern California. He attended the Wharton School for an MBA and began to work at the investment banking firm of Drexel Firestone in Philadelphia. This is the beginning of his phenomenal career which made him a multi-millionaire.

Bruck tells the story of the junk bond dealers and the fabulous deals they made. The junk bond market was created by Milken just as the hostile takeover financed by junk bonds was a Milken creation. Corporate raiders came into being with Milken at the head. Milken always did it his way, no matter what the rules were. He always charged his customers premium prices but he always came through for them. They were willing to pay in order to use his services and finances.

The Predators' Ball is a yearly event at the Drexel firm. It is formally known as the Drexel High Yield Bond Conference and is usually held at the posh Beverly Hilton Hotel. There are presentations and meetings with the leaders of industry and government. There are also parties and meals. Drexel customers can meet each other at these meetings which fit in with Milken's usual modus operandi where customers, and Drexel, held each others debt and equity. The Predators' Ball allowed them to become acquainted and to learn about the latest innovations in the junk market.

Bruck introduces the reader to the players at Drexel as well as the participants in the junk market, including some of the biggest corporate raiders like Ron Perelman and Carl Icahn. The book looks at what factors motivated them and how did they rise to the pinnacles of industry. Most of them started out from modest beginnings, went to school and ended up in mergers and acquisitions and became very wealthy, but Milken didn't show the trappings of wealth. He lived in an unpretentious home in Encino and he and his wife both avoided the jewelry and furs lifestyle. He encouraged his staff to do the same, even though they made hundreds of millions of dollars with him. They kept New York hours at their Beverly Hills office as Bruck presents his rise at Drexel to become known as the King of junk bonds.

The book also covers some of the war stores of the different raids. There is the Triangle-National Can deal, the Icahn-TWA deal and the Perelman Pantry Pride and Revlon deal that resulted in the involved parties becoming the biggest corporate raiders in America with deal worth billions of dollars. Miken made it look so easy. On the way to the top, rules were bent and eventually Milken and Drexel come under investigation by the SEC and the U.S. Attorney's Office. Milken was charged under the RICO act in the end.

More summaries and resources for teaching or studying The Predators' Ball.