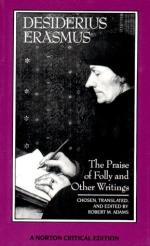 Desiderius Erasmus
This Study Guide consists of approximately 21 pages of chapter summaries, quotes, character analysis, themes, and more - everything you need to sharpen your knowledge of The Praise of Folly.

The Praise of Folly Summary & Study Guide includes comprehensive information and analysis to help you understand the book. This study guide contains the following sections:

This detailed literature summary also contains Topics for Discussion and a Free Quiz on The Praise of Folly by Desiderius Erasmus.

The Praise of Folly was written by Desiderius Erasmus of Rotterdam (1466 - 1536), a classical scholar and one of the foremost members of the "humanist" movement of the 16th century. Erasmus widely criticized the Roman Catholic Church of his day but remained a member and often debated with early Protestant Reformers. Erasmus wrote The Praise of Folly in 1509 during a trip from Italy to visit his friend Thomas More, a great English humanist who was beheaded by Henry VIII for refusing to recognize the King as the supreme head of the Christian Church in England.

The Praise of Folly lambasts many popular Catholic practices and Catholic theologians, monks, cardinals, bishops, popes and priests and was one of the principle documents leading to the Protestant Reformation, despite the fact that Erasmus remained a Catholic.

The book opens with a brief letter by Erasmus explaining the origins and purpose of The Praise of Folly to Thomas More, and informing More that the book was dedicated to him, but in the main body of the book, the only speaker is Folly, the personification of foolishness herself. She speaks extemporaneously and extravagantly at great length in order to establish the simple proposition that Folly deserves the praise of all. It is not clear where she is speaking, but her audience appears to be all of European society.

In order to make her argument, she proceeds in several parts. She begins with an exhortation and introduction, which is followed by an explanation of why she should praise herself and how she will give her speech. She declines to divide herself and holds that all people recognize her.

The heart of the book is the confirmation, or main line of argument. To defend the fact that she deserves the praise of all men, Folly first points out that she is descended from a noble lineage and has ample claim to divine status. She argues that any great action taken requires her power, along with her close companions. Folly is involved in true prudence and in the acquisition of wisdom. She argues at length that foolishness is a happy rather than an unhappy state and denies that it is wretched to be foolish or crazy. She then claims that she is the greatest of the Roman pantheon of Gods.

Folly spends more of her time arguing that all people are her followers. This is where the main line of critique appears. Those that she argues are her followers are clearly those Erasmus wants most clearly to lambast. She argues that her worshipers include grammarians, authors, men of the learned professions, theologians, monks, kings and courtiers, bishops, cardinals, popes, and priests. She focuses on Catholic theologians and monks for particular criticism for being dishonest, fraudulent, tyrannical, and so on. Folly follows these claims with arguments that fortune is on the side of the fools and that many great authorities exalt her. She ends with the claim that Christianity bears important similarities to her and ends by refusing to summarize her speech and exhorting her listeners to continue about their folly as they did before.

More summaries and resources for teaching or studying The Praise of Folly.

The Praise of Folly from BookRags. (c)2022 BookRags, Inc. All rights reserved.