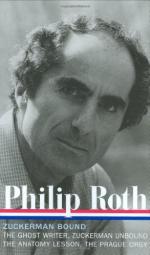 The novel begins in New York 1976 when Zuckerman meets Sisovsky, a banned Czech writer living in America. Sisovsky explains that his father was a great hero killed by the Gestapo. The father was a genius writer who wrote stories in Yiddish, which were compiled into a manuscript. However, Sisovsky's estranged wife, Olga, will not give it to him. He wants Zuckerman to travel to Prague to retrieve them.

Bolotka takes him to his apartment. Zuckerman sees how writers live in squalor in Prague. He meets Olga at his hotel the next day. However, Zuckerman is warned by a Czech student that the authorities are creating a case against Zuckerman for conspiring with dissident Czech writers to hurt the Communist regime. He tells Zuckerman to leave Czechoslovakia at once. Zuckerman is shocked. He abruptly tells Olga his real reason for traveling to Prague and asks for the manuscript. She is outraged and says no.

Zuckerman takes an important trolley ride to Bolotka's apartment where he has insights on his Judaism. He feels connected to Eastern European Jews. Bolotka tells him not to worry. The authorities are not after Zuckerman. He can do whatever he pleases in Prague.

On a whim, Olga gives Zuckerman the manuscript and tells him to tell Sisovsky and his mistress she gave it to him without asking for anything in return. Zuckerman returns to his hotel and within 15 minutes the authorities confiscate the manuscript. They put him in a black limo. Novak, the Minister of Culture and a successful writer, tells Zuckerman that Novak's father, who honors each occupying regime, is a true hero. Zuckerman is dropped off at the airport without the manuscript. He boards a flight to Geneva, Switzerland to connect to New York. At passport control, the agent says Czechoslovakia is honored that Zuckerman visited, but now he must go back to America.