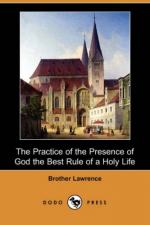 The Practice of the Presence of God - Letters, 1-5 Summary & Analysis

Lawrence begins his first letter by imploring the recipient to destroy the contents, so no one else ever reads them. Apparently, this person fails to honor his wishes. He advises the recipient to live only for God. Lawrence views himself as a criminal, one who breaks the law of God. Lawrence sees God in many different perspectives. In this letter, he sees God as his judge.

A life on continual prayer and an awareness of God's omnipresence hinders sin in Lawrence's life. He defines sin as anything contrary to God's plan for his life. He learns this plan with much prayer and contemplation. He ends the letter with thanks to God for blessing his life.

In the opening of letter two, Lawrence says many spiritual advisors describe a Christian's life as a movement from service to God out of...

(read more from the Letters, 1-5 Summary)