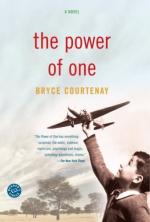 The Power of One Summary & Study Guide

Bryce Courtenay
This Study Guide consists of approximately 63 pages of chapter summaries, quotes, character analysis, themes, and more - everything you need to sharpen your knowledge of The Power of One.

The Power of One Summary & Study Guide Description

The Power of One Summary & Study Guide includes comprehensive information and analysis to help you understand the book. This study guide contains the following sections:

This detailed literature summary also contains Topics for Discussion on The Power of One by Bryce Courtenay.

This novel was published in 1990 and is the first in a number of books written by Bryce Courtenay.

The story takes place in the South Africa of Courtenay's youth, an incredible and majestic land that has experienced many different cultural and racial divisions and tensions.

Into this land, a young boy is born and grows up affected by the different cultures around him, including both Boer and his own English heritage, and by the colored people of South Africa, including Indians and the various African tribal groups including the Zulu, Swazis, Sangaans, and Ndebele.

The boy is the very center of the story, which is told from his point of view from the time he is five years old until he is eighteen. There is a special focus placed on his education, both formal and informal. Formally, he attends two different boarding schools; a school for young children populated mostly by Boer boys who are hostile to him, and the Prince of Wales school which he attends from the age of nine and which is mostly composed of wealthy English boys. His informal education comes at the hands of many different acquaintances and friends in his life, both young and old, black and white, Boer and English, male and female, captive and free.

Through one of his very first human friends, the boy realizes a dream of becoming the welterweight boxing champion of the world. From the age of six, he works doggedly towards this dream.

On a very real level, this story is one of self-discovery and identification. The reader never actually learns the real name of the main character; one only knows him by what others call him and by what he calls himself.

As for family, the boy lives with his grandfather and his mother, and he is thrust out into the world when his mother suffers a nervous breakdown. Although she recovers, the time in between proves to be very difficult for the young boy, and thus his feet are set on a certain path very early.

Precocious and athletic as well as determined, Peekay, as he is eventually called, overcomes many obstacles he encounters both within himself and in the culture he has been born into in order to provide some highly relevant insights into the world in which he lives. Eventually, the tale of his life will come full circle and he will understand that through the power of one, he can achieve all of the goals that he sets for himself.

More summaries and resources for teaching or studying The Power of One.

The Power of One from BookRags. (c)2022 BookRags, Inc. All rights reserved.