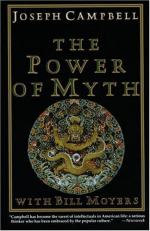 Joseph Campbell
This Study Guide consists of approximately 39 pages of chapter summaries, quotes, character analysis, themes, and more - everything you need to sharpen your knowledge of The Power of Myth.

The Power of Myth Summary & Study Guide includes comprehensive information and analysis to help you understand the book. This study guide contains the following sections:

This detailed literature summary also contains Topics for Discussion and a Free Quiz on The Power of Myth by Joseph Campbell.

"The Power of Myth" is based on the interviews between Joseph Campbell and Bill Moyers that became a famous television series. It deals with the universality and evolution of myths in the history of the human race and the place of myths in modern society. Campbell blends accounts of his own upbringing and experience with stories from many cultures and civilizations to present the reader with his most compelling thesis that modern society is going through a transition from the old mythologies and traditions to a new way of thinking in which a global mythology will emerge.

Campbell draws on material he has gathered from over forty years of teaching comparative mythology. His lifelong quest for legends and myths of different peoples and cultures started when, as a boy undergoing religious instruction in the Roman Catholic faith, he realized that the mythology of American Plains Indians corresponded with those of the Christian tradition. Later he studied the sacred Hindu writings of the Upanishads and the Arthurian legends of the Holy Grail and in doing so, he developed the concept of the universality of all mythologies and legends, constituting the fundamental spiritual beliefs of mankind. In the transcripts of the discussions that are the basis for this book, he traces the origins and development of different religions and how they relate to the mythologies of the different emerging social cultures.

The subject matter and development of ideas does not follow a formal systematic scheme. Instead Campbell presents his ideas as a cornucopia of glittering poetic images with Bill Moyers summarizing and clarifying the topics that disappear and reappear in the discussion, rather like musical themes in an orchestral work. The scope of the work encompasses Campbell's previously published books and includes creation myths, the Goddess religions of the Oriental world, the transformation of mythologies as cultures develop, the universal myths of hero legends and the historical basis for the contemporary Christian religion. Identical themes and symbols from Christian beliefs and Hindu and Buddhist traditions lead to the juxtaposition of images of the crucifixion of Christ and the Oriental deity, Bodhisattva, from whose fingertips the ambrosia of compassion drips down to the lowest depths of Hell.

The chapter entitled "the Masks of Eternity " outlines the universal concepts of God and Eternity as found in the Christian, Buddhist, and Hindu traditions. In all of these philosophies there is the idea that the deity is within each individual and that this internal being also embodies eternity. This concept, which Campbell calls "the Christ within," along with his personal philosophy of "follow your Bliss!" and the necessity for the emergence of a global mythology, constitute the major conclusions of the book.

More summaries and resources for teaching or studying The Power of Myth.

The Power of Myth from BookRags. (c)2022 BookRags, Inc. All rights reserved.