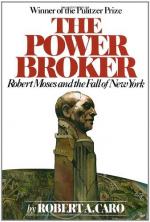 Robert Caro
This Study Guide consists of approximately 79 pages of chapter summaries, quotes, character analysis, themes, and more - everything you need to sharpen your knowledge of The Power Broker.

The Power Broker: Robert Moses and the Fall of New York Summary & Study Guide includes comprehensive information and analysis to help you understand the book. This study guide contains the following sections:

This detailed literature summary also contains Topics for Discussion and a Free Quiz on The Power Broker: Robert Moses and the Fall of New York by Robert Caro.

The Power Brokers Robert Moses and the Fall of New York, by Robert A. Caro is the story of Robert Moses and the construction of the parks, bridges, highway system, United Nations Building, and other structures in New York. Robert Moses is a young man with a dream to build an infrastructure for the New York City area. He is educated at Yale University and Oxford University and returns to New York filled with the idealism of youth. He wants to reform the government and he has the education and training to do so(but he doesn't have the opportunity. Moses knows what he wants to do but he learns that he can't accomplish it without power. He studies the situation and learns where the source of power is. He either needs the support of the people with power or he needs to develop his own power. Moses does a little of both.

Moses becomes one of the most powerful men in New York, if not the most powerful. He lives to see most of his dreams for New York fulfilled. His idealism and ideas to reform the system and rid it of corruption lead him to learn how to play the game to make the system work for him. He learns how to get his projects approved and to acquire the necessary funding, independent of the powers that be. Moses creates for himself an empire known as Triborough, of which he is the sole ruler. A bridge authority stays in existence until its bonds are repaid. Instead of allowing the bonds to be paid off, Moses learns how to reissue them on a continual basis so that they are never paid off. This ensures that the bridge authority, Moses' source of power, stays in existence and under his control.

Moses literally writes his own laws. He writes the bills that come before the legislature in a way that empowers him and prevents himself from being easily removed from his positions In the bills he writes, he ties himself to the authority, funding and bonds. The amazing thing is the fact that nobody thoroughly reads the bills before they are presented to and adopted by the legislature. Moses doesn't just do this once, but does it over and over, maneuvering himself into a position where he singularly controls all federal funding for projects in New York. This is the situation in New York for many years. Moses gets things done, with several parks, bridges, highways, dams and buildings that act as ever-present evidence of that fact. It isn't until the press and public become aware of his methods that Moses loses his untouchable quality. Payoffs, ties to organized crime, people being displaced with nowhere to go, sponsors becoming rich off the projects and other such irregularities begin to be uncovered and the press begins to dig. However, Moses is too entrenched in the system to be fired. He is eventually outsmarted by Governor Rockefeller and separated from his source of power when he is in his mid-seventies.

This book shows how the New York infrastructure is built and all that goes into it. Moses becomes world-famous as a road builder whose assistance is requested by several foreign governments. He builds things quickly and continually to maintain his power source. Without him, New York wouldn't have the roads, parks and bridge system that it has.

More summaries and resources for teaching or studying The Power Broker: Robert Moses and the Fall of New York.

The Power Broker: Robert Moses and the Fall of New York from BookRags. (c)2022 BookRags, Inc. All rights reserved.