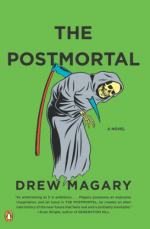 Drew Magary
This Study Guide consists of approximately 80 pages of chapter summaries, quotes, character analysis, themes, and more - everything you need to sharpen your knowledge of The Postmortal.

The Postmortal Summary & Study Guide includes comprehensive information and analysis to help you understand the book. This study guide contains the following sections:

This detailed literature summary also contains Quotes and a Free Quiz on The Postmortal by Drew Magary.

There is a short note at the beginning of the novel stating that the work included in this novel was a collection of archived materials found on an old laptop buried in the rubble after the Great Correction took place. It chronicled the time from 2029 to 2079 and served as a very good indication of what life was like during that time in human history. The collection's owner, John, is no longer living and died during the Great Correction.

Postmortal, by Margery Drew, began with the first of the blog posts by protagonist, John Ferrell in the year 2029 before he had taken the cure. The cure was developed by Graham Otto and completely halted the aging process. Unfortunately, the technology was twisted and offered on the blackmarket before it was even completely tested or had gone through the clinical trial process. Appalled, Otto backed the President's ban on the sale of the cure. This only made it more popular. John Ferrell was one of many young affluent people who went to get it done under the table.

John's roommate, Katy, found out that he'd gotten the cure and begged him to take her to get it as well. He agreed and on the day that he took her to the building to have it done the building was targeted by terrorists who were against the cure and its application. Just before the bomb went off, John spied a hot blonde woman exiting the building. Then the bomb went off and Katy died in the building. John never forgave himself. The demonstrations for legalizing the cure escalated until eventually the President lifted the ban and everyone rushed out to get the cure. Extravagant cure parties were thrown in Vegas and John attended one because he never had one before. He met a man named Keith who had decided to take a full year and spend it in a new country. When John met him Keith had already lived in a dozen countries. John envied him, but just wasn't ready for that kind of freedom yet.

John told his father and sister that he'd gotten the cure and both of them are horrified that he'd done it. Neither of them are judgmental, but question the wisdom of wanting to live forever. John quickly told them that the cure didn't prevent death, just stopped aging. A person could still die from an accident, a heart attack, or other diseases. Still, they are unconvinced. Back in his law firm, his boss told him that he needed to re-specialize in divorce law as they were instituting a new type of legal transaction called cycle marriages. Since people were living much longer, the 'death til us part' clause had grown outdated.

John became involved with a woman named Sonia. They had dated for four years when Sonia asked him what his intentions were. He didn't want to get married because in his mind it was pointless. She confronted him and asked him if they hadn't taken the cure if it would have been easier for him to marry her. He told her that probably that was true. She also told him that she was pregnant with his child. He still won't marry her, but agreed to help raise the child. She left. John leaned that the blonde woman from Katy's building bombing had been spotted at three other buildings that were targeted. He was certain that she was the instigator or leader of the group.

Many problems began to emerge due to the anti-aging public. There began to be a shortage of living spaces, food began to be more expensive, and there were rumors that many countries were implementing totalitarian measures to conserve resources. Russia had become aggressive in securing resources for its country, and China made it mandatory for its citizens to have their real birthdates branded onto their arms. In the U.S. the President told those taking the cure that they would no longer be eligible for social security or health benefits.

One evening while walking home from a local bar, John was jumped by three extremists calling themselves Greenies. They held him down and carved his real birth date on his forearm, then beat him and left him for the officials to find. He began carrying a pistol after that incident. Sonia remarried and soon John received a call stating that she was headed to the hospital to have the child. The baby was a boy and John was allowed to name him David. For the first part of David's life, John helped to care for him as he promised. However, after that he decided that he wanted to go see the world, and having enough money to do so, he left the country. His only contact with his son, for the next twelve years, was through video interface. He learned that his son was attending a Church of Man group. This was a group that had determined that the only divine element in the universe was mankind, himself.

After John returned from his round-the-world expedition, the time is 2059. He decided that he needed to reconnect with his son, face-to-face. Now a grown man, David has turned into a nice person. His devotion to the COM (Church of Man) has made him a respected member in the community. David asked his father to come to one of the services, and just to humor his son, he agreed to go to one near where he lived. He went to one but while there he was attacked by a man with a gun who declared that they were all abominations. John called David and told him that he went and that he would not be going back.

John's father took the cure, and then only a few months later came down with cancer. He refuses treatment and John must watch him die. He understood as he watched his father die, that death isn't the big evil that everyone thought it was. The media continued to report shortages of water, gas, and food in many of the countries. The homeless were increasing.

Having returned back to the city, John doesn't really want to go back to being a lawyer. A friend of a friend sends him to someone that might have a job for him. John learned that the job was called an 'end specialist'. Those who had taken the cure and no longer wished to live could purchase their death through government sanctioned and subsidized end centers. John, at first, didn't want to do the job, but then after a few of the jobs he realizes that they provide a merciful service to those who wish to die. He works for a man named Matt, and has a partner named, Ernie. Soon, John rose through the ranks and was promoted to the same rank as Ernie, which meant that he was able to end someone's life.

One of the targets that he was handed one day was someone he thought he'd never see again. It was the hot blonde that bombed Katy's building. John was more than excited to try and track her down. However, she remained elusive for many years. Ten years later, while he was downtown getting a bite to eat, he spotted her. When he finally apprehended her she gave him her side of the story. John learned that she had only been the lookout for the buildings and that she had been afraid for her life because the actual bomber was crazy and would have killed her. John believed her, and more than that, realized that he had fallen for her and was feeling things that he hadn't felt in decades. Her name is Solara Beck.

During this time the pervue of the end specialists is expanded to include the elderly and John found that he could no longer do his job. He told Ernie, when they were sent to kill an old woman, that he would pretend to overpower Ernie and then just leave. Ernie agreed, but they both know that they are now on the hit list. Quickly, John ran back to get Solara, who had moved in with him, and they left town. Solara is pregnant and as they got into the car to leave, John confessed his feelings to her. He told her he didn't expect her to feel the same for him, but that he just needed to say it to her. He told her that he would marry her, cure or no cure, and that he finally got what it meant to care for someone that much.

The state of the world has gone downhill. China has nuked its own people in order to ease the overcrowding. They called it the Great Reset. There are reports of feral bands of soldiers that had defected from many of the world's militaries. A new medical breakthrough called skeleton key is a cure all and most that could afford it, took it. The military required it for their recruits. John and Solara attempted to get out of town, but when the power goes out, everyone panicked and headed for the roads. They didn't get very far before they were attacked. Before the soldiers can harm them, there is a bright pulse of light and the soldiers are blinded. The first of many nuclear bombs have been detonated.

John took Solara and they ran for cover, taking shelter in a basement for the next two days. Afterward, they ran toward a compound that the Church of Man were holed up in. He mentioned his son, David, to them, and they agreed to take them in. They are directed to go to a secret entrance point. However, on their way there, John was stabbed. Solara managed to drag him to the secret entry point, but just as he was about to crawl into the door, a soldier came out of nowhere and shot Solara through the shoulder. They are both pulled through the door at the last minute.

In the confines of the Church's bunker, the doctor treated Solara, but refused to treat John. They told him that he had been allowed to live for decades simply because of David's standing in the church. However, they would not help him live any longer. John didn't care, but asked the Reverend to formally marry he and Solara. He does. John settled back and watched Solara as she was taken care of. He is told that she and the baby will make it just as the next pulse of light goes off outside. John reached into his pocket and took out a vial of SoFo, which was the lethal injection he'd used on his targets. He injected himself as another flash rocked the building.

More summaries and resources for teaching or studying The Postmortal.

The Postmortal from BookRags. (c)2022 BookRags, Inc. All rights reserved.