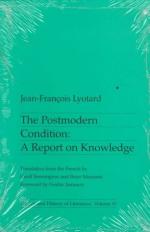 The Postmodern Condition: A Report on Knowledge Summary & Study Guide

Jean-François Lyotard
This Study Guide consists of approximately 35 pages of chapter summaries, quotes, character analysis, themes, and more - everything you need to sharpen your knowledge of The Postmodern Condition.

The Postmodern Condition: A Report on Knowledge Summary & Study Guide includes comprehensive information and analysis to help you understand the book. This study guide contains the following sections:

This detailed literature summary also contains Topics for Discussion on The Postmodern Condition: A Report on Knowledge by Jean-François Lyotard.

Nowadays there is the growth of computerized systems. As with all transformations in science, the computer age has resulted in a transformation of social relations in society . Unfortunately, science is yet to come to terms with the fact that the discipline of science, or rather, scientific method, is no longer serving society as a legitimate function. When the stories one tells themselves about the world are not legitimate, then society suffers. Only by recognizing that history will never reach its culmination but will continue on, forever changing, can one recognize that the stories one tells oneself are flawed. The age old stories of the hero as the emancipator have been largely relegated in history. Science is a-historical because the narrative it tells is not justified if the knowledge it attempts to present is objectified and loses its humanity. Historical narrative, on the other hand, relies on the internalization of the story and has been presented by the storyteller whose authority is not questioned because of their place in society and because of the nature of communication as the storyteller.

The language games of science attempt to incorporate the philosophical theories of history. By doing so, it believes it can maintain legitimation. However, this is impossible, because science is not consistent and is in a state of uneven change; when new theories arrive, one is thrown into a state of confusion of a new paradigm. Science itself sets the rules. Truth is made not by addressing knowledge but by finding counterexamples to knowledge. This makes science paradoxical.

Not only is it the method of science that seems contradictory, but the latest findings in quantum mechanics finds that objectification is difficult to find. Theories of quantum mechanics demonstrate the world is not always discrete, consistent, and rational.

Science needs to face up to its system of language games, which are not ethically justified. Supposed legitimation in the language games of science are reduced to adversarial relations, like playing a game, where those that have access to capital are able to perpetuate their social standing while those who cannot are left by the wayside. **This problem results in science being repressive in what Lyotard says can be terroristic by threatening others whom attempt to play the game and are not invited, or those playing the game but refuse to play by the rules. These individual are pushed out of the scientific language game by force by cutting off funding for research for example, regardless of the legitimacy of their scientific research.**

Because of research's divorce from the philosophical underpinnings of the university, research becomes a tool simply for technocrats, bureaucrats, and political leaders. If science does not acquiesce to the demands of the age, then society will suffer and creativity will disappear. **By forcing scientific realism on the world, this results in the degrading of society, with further alienation from the language game of the hero, the emancipator, and the bringer of freedom. This leaves instead a form of delegitimacy emphasizing the continual speeding up in productivity.**

More summaries and resources for teaching or studying The Postmodern Condition: A Report on Knowledge.

The Postmodern Condition: A Report on Knowledge from BookRags. (c)2022 BookRags, Inc. All rights reserved.