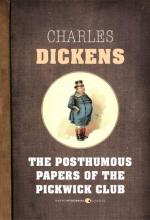 The Posthumous Papers of the Pickwick Club Summary & Study Guide

Charles Dickens
This Study Guide consists of approximately 46 pages of chapter summaries, quotes, character analysis, themes, and more - everything you need to sharpen your knowledge of The Posthumous Papers of the Pickwick Club.

The Posthumous Papers of the Pickwick Club Summary & Study Guide includes comprehensive information and analysis to help you understand the book. This study guide contains the following sections:

This detailed literature summary also contains Topics for Discussion and a Free Quiz on The Posthumous Papers of the Pickwick Club by Charles Dickens.

The Pickwick Club by Charles Dickens is the story of a fraternity of men who begin a traveling society in order to advance their scientific knowledge. Throughout the novel, the founder of the club, Mr. Pickwick, loses his innocence and begins to attain knowledge of the evils of the world. The Pickwick Club displays the many interactions and complications that occur between men and men and between men and women.

The Pickwick Club votes to begin a traveling club in order to extend their knowledge. On their way to Rochester, they are joined by an arrogant young man who borrows Winkle's coat for the ball. When the stranger seduces the widow that Dr. Slammer is courting, a duel nearly ensures between Dr. Slammer and Winkle. Next, the Pickwickians go to Chatham to see the army and meet Mr. Wardle who invites them to join his family picnic. Snodgrass likes Emily Wardle, and Tupman likes Rachael, Mr. Wardle's spinster sister. Mr. Wardle invites the Pickwickians to his home in Dingley Dell, and the Pickwickians visit him on Manor Farm. The party goes crow hunting, and when Winkle accidentally shoots Tupman in the arm, Rachael nurses Winkle as the other go to a cricket match and encounter Jingle. Tupman declares love to Rachael which upsets Mr. Wardle when he discovers it. Jingle suits Rachael and elopes with her. Mr. Wardle and Mr. Pickwick pursue them. At the White Hart Inn in London, Sam Weller directs them to Jingle's lodgings. Mr. Perker, Mr. Wardle's lawyer, convinces Mr. Wardle to buy Jingle off.

Mr. Pickwick returns home and asks to discuss something with Mrs. Bardell, his landlady. She misunderstands him, thinking he wants to propose. Mr. Pickwick hires Sam Weller as a personal servant. The Pickwickians attend the Eatanswill election where Mr. Perker introduces them to Mr. Pott. The Pickwickians attend a costume breakfast where they encounter Jingle, and Mr. Pickwick pursues Jingle to Bury St. Edmunds in order to expose him. Sam Weller meets Job Trotter, Jingle's servant who plays a trick on Mr. Pickwick and Sam Weller. Winkle flees when he is accused of seducing Mrs. Pott who likes him. Mr. Wardle invites the Pickwickians to Isabella's wedding over Christmas. When Mr. Pickwick receives a letter from Mrs. Bardell announcing her intent to sue him for breach of promise, he returns to London for legal advice. From Dodson and Fogg's office, he learns about the damages that he is being sued for.

Mr. Pickwick and Sam Weller run into Sam's father, Tony Weller who informs them that Jingle and Job Trotter are on their way to Ipswich. Mr. Pickwick and Sam register at a large inn in Ipswich where Mr. Pickwick nearly causes a duel with Peter Magnus when he accidentally enters and undresses in the wrong room. The Pickwickians are arrested, but Mr. Pickwick informs the justice, Mr. Nupkins, that Jingle is his daughter's suitor. Sam Weller begins a romance with the Nupkins' housemaid. Mr. Pickwick returns to London, moves out of Mrs. Bardell's house and learns about the lawsuit. The Pickwickians attend Isabella's wedding at Manor Farm where Winkle meets Arabella Allen and becomes jealous of Bob Sawyer. Back in London, Mr. Pickwick's trial commences; he is found guilty, but he refuses to pay the damages. The Pickwickians go to Bath with the Dowlers for two months, but Winkle has a misunderstanding with Mr. Dowler and flees to Bristol where he runs into Bob Sawyer and Ben Allen. Winkle confesses his love for Arabella to Mr. Pickwick and Sam Weller, and she returns his affections. Mr. Pickwick returns to London and is arrested. Sam Weller obtains debt and also goes to Fleet Prison where they encounter Jingle and Job Trotter with whom they reconcile. Mrs. Bardell is arrested for not paying her attorney fees, and Mr. Perker, along with Winkle and Arabella, convince Mr. Pickwick to pay his fines and be released from prison in order to reconcile Winkle and Arabella's relatives to their elopement.

Mr. Pickwick goes to Bristol where he reconciles Ben Allen to Arabella's marriage, but he is less successful with Mr. Winkle, Sr. Back in London, Mr. Pickwick pays for Jingle and Job Trotter's release and positions in the West Indies where they succeed. He pays Dodson and Fogg and runs into Wardle who announces Emily's intent to elope with Snodgrass. Arabella eventually wins Mr. Winkle, Sr. over, and Mrs. Weller dies, leaving her money to Sam and Tony. Tony Weller gives his money to Mr. Pickwick who invests it for him. Mr. Pickwick buys a house in Dulwich, and the Pickwick Club disbands. Snodgrass marries Emily and retires to the country, Sam Weller marries Mary, and Tupman remains a bachelor. Tony Weller retires on his investments while Bob Sawyer and Ben Allen become surgeons in India. Mr. Pickwick lives as a respected, well-loved gentleman.

More summaries and resources for teaching or studying The Posthumous Papers of the Pickwick Club.

The Posthumous Papers of the Pickwick Club from BookRags. (c)2022 BookRags, Inc. All rights reserved.