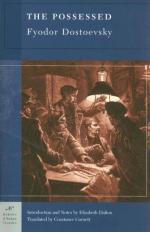 Fyodor Dostoevsky
This Study Guide consists of approximately 44 pages of chapter summaries, quotes, character analysis, themes, and more - everything you need to sharpen your knowledge of The Possessed.

The Possessed Summary & Study Guide includes comprehensive information and analysis to help you understand the book. This study guide contains the following sections:

This detailed literature summary also contains Topics for Discussion and a Free Quiz on The Possessed by Fyodor Dostoevsky.

The Possessed is a novel that dramatizes the cultural and political troubles of Russia in the mid-19th century. It tells the story of a small cell of nihilist terrorists that cause chaos and commit several murders in a provincial Russian town.

The novel follows the story of two families, the Stavrogins and the Verkhovenskys and the circle of people that revolve around these two families. Stepan Verkhovensky, an intellectual, liberal, and ex-professor tutors Mrs. Stavrogin's son, Nicholas and keeps a small circle of political radicals. Nicholas Stavrogin, a charismatic but morally questionable and rootless young man, returns to his provincial town and brings the various sundry affairs with local women and hangers on of political radicals with him. One of these men is Peter Verkhovensky, the estranged son of Stepan who has become involved in radical politics. Other young men associated with Nicholas who have become involved in radical politics are Shatov and Kirilov. Shatov, once a socialist member of Peter's group and now a reactionary, wishes to leave the group, though Peter will not let him leave. Kirilov is a friend of Shatov's who accompanied Shatov on a trip to America before he also rejected socialism in favor of a strange philosophy that glorifies suicide.

Peter, while ingratiating himself with the local governor's wife, plots political revolution in the town. He supposedly works with the socialist Internationale and has been developing radical terrorist cells of five in many cities in Russia and throughout Europe. Peter has recruited members of his father's discussion circle and other radicals as well as local criminals to participate in his cell. They plan to foment dissent and incite violence from the local factory workers and to undermine the authority of local opinion leaders.

To this end, Peter convinces Mrs. Lembke, the provincial governor's wife, to throw a fete where he and his friends can mock the cultural elite and incite the population. Their plan works well and during the fete some of their members set fire to the poorer side of town, causing a tremendous inferno. Peter also uses one of his agents to murder Nicholas' secret wife and to arrange an illicit liaison between Nicholas and Lisa. Lisa, after the affair, discovers that Stavrogin's wife has been murdered and suspects Nicholas. While attempting to see the dead body of Nicholas's wife, Lisa is murdered by an angry mob of townsfolk.

Meanwhile, Peter has been manipulating his cell to plot the murder of Shatov who insulted Peter in the past. Peter claims that Shatov is an informant and convinces his cell that if they do not kill Shatov he will turn them all into the police. This is a lie, of course, though the group believes that Shatov is an informant and agrees to go forward with the murder. Kirilov believing that suicide is the most supremely perfect act a human can perform is convinced by Peter to kill himself and take the blame for the Shatov murder. Peter's group is successful in murdering Shatov and in convincing Kirilov to commit suicide. After the murder, Peter leaves the town and the rest of the conspirators are arrested and confess. The novel closes with Stepan converting to Christianity before dying of illness and Nicholas Stavrogin returning home only to hang himself.

More summaries and resources for teaching or studying The Possessed.

The Possessed from BookRags. (c)2022 BookRags, Inc. All rights reserved.