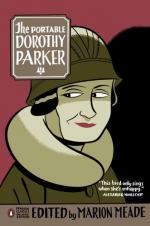 Dorothy Parker
This Study Guide consists of approximately 35 pages of chapter summaries, quotes, character analysis, themes, and more - everything you need to sharpen your knowledge of The Portable Dorothy Parker.

This detailed literature summary also contains Topics for Discussion and a Free Quiz on The Portable Dorothy Parker by Dorothy Parker.

Dorothy Parker 1893-1967 is considered one of the first feminists of the 1900s. Born in New Jersey as Dorothy Rothschild in 1893, Dorothy grew up in New York. Although she lived with a strict father and stepmother and was schooled in a convent, Dorothy took New York by storm at an early age. At age 16, Dorothy developed a business relationship with Vogue editor, Frank Crowninshield, who gave her an editorial position at the upscale magazine. Crowninshield was also a ranking officer at Vanity Fair and eventually hired Dorothy to be the magazine's drama critic. Vanity Fair also purchased Dorothy's first poem, "Any Porch", for a sum of $12.

Dorothy married Edwin Pond Parker in 1917 and divorced the same year. Although Dorothy would later marry Alan Campbell to whom she would be married for more than thirty years, she decided to keep the name Parker. Perhaps this was a statement of practicality since many of her works were published under that name.

Parker's most famous allegiance, however, is tied to the Algonquin Roundtable. After being fired unfairly from Vanity Fair, Parker formed "Park-Bench" a writing partnership with writer Robert Benchley. While at Vanity Fair, Parker and Benchley began having luncheons at the Algonquin Hotel with fellow writers. The group quickly became famous due to its outspoken ideas and illustrious members, such as F. Scott Fitzgerald, Robert E. Sherwood, James Thurber, Ernest Hemingway, George S. Kaufman, and Franklin P. Adams. There were 24 members in all.

Dorothy Parker was also known for sharp criticisms and satire to which no one was immune. Unfortunately, Parker's fame dwindled with age and the writer's depression and alcoholism took its toll. Dorothy Parker died in 1967 at age seventy-three.

Mimi McVicker is the main character in The Lovely Leave. Mimi is married to a pilot who has been away for the past six months. During that time, Mimi obsesses over every wrong thing she has said or done and promises herself that the leave will be absolutely perfect. Mimi goes to a great deal of trouble to please her husband, Steve. Steve likes black dresses, so Mimi purchases a new one that is very expensive. Mimi ignores the price because she does not intend to ever pay the bill. A new nightgown is purchased and wrapped in fragrance in the bureau drawer. There are fresh flowers placed carefully around the apartment and the best food ready to be prepared.

When Steve arrives, Mimi is distressed to learn that the leave has been canceled and that Steve only has a short time to spend at home. Mimi immediately begins to wail and argue but Steve says there is nothing to be done. From that point forward, Mimi becomes a whirlwind of conflicted emotions and irrational behavior. Although Mimi had promised herself that the leave would be perfect, without argument, she causes one argument after another. Steve's desires to read the newspaper and to take a bath are perceived as slights toward Mimi and she says it's because he doesn't want to be with her. Steve works toward creating a pleasant evening and reconciling the situation. Mimi has moments of melancholy as well as being repentant for her behavior.

Steve leaves with Mimi still complaining about the canceled leave. Although the leave had appeared to be miserable, Mimi reports to a friend that it was lovely.

Mr. Durant is an assistant manager at a rubber company. Although Durant is forty-nine-years-old and married, he has an affair with a young stenographer.

Annabelappears in The Standard of Living

Annabel is a stenographer who invented the game of pretending to spend a million dollars on oneself.

Hobieappears in Dusk Before Fireworks

Hobie is a young man sought after by many women and has a difficult time keeping them separate. It is not clear if Hobie is simply attractive or is a sexual release for a long list of clients.

Mrs. Martindaleappears in Song of the Shirt, 1941

Mrs. Martindale is a well-to-do, compassionate woman who puts aside her own ambitions and desires to volunteer for soldiers in the war.

Walter Williamsappears in Arrangement in Black and White

Walter Williams is a black musician who is the guest of honor at a dinner party in Arrangement in Black and White.

Rose is the twenty-year-old stenographer who has an affair with Mr. Durant.

Hazel Morse is the main character in Big Blonde. Hazel is a thirty-something woman who is prone to severe depression and alcoholism.

Miss Wilmarth is a well-trained baby nurse who accompanies Camilla Cruger home from the hospital.

More summaries and resources for teaching or studying The Portable Dorothy Parker.