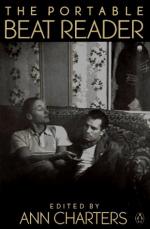 Various
This Study Guide consists of approximately 41 pages of chapter summaries, quotes, character analysis, themes, and more - everything you need to sharpen your knowledge of The Portable Beat Reader.

"The burden of my generation was to carry this in utter helplessness—the genocide, the overkill—and still seek love in the underground where all living things hide if they are to survive our century."
East Coast Beats, p. 4

"In the West he'd spent a third of his time in the poolhall, a third in jail, and a third in the public library."
Jack Kerouac, p. 14

"But then they danced down the streets like dingledodies, and I shambled after as I've been doing all my life after people who interest me, because the only people for me are the mad ones, the ones who are mad to live, mad to talk, mad to be saved, desirous of everything at the same time, the ones who never yawn or say a commonplace thing, but burn, burn, burn like fabulous yellow roman candles exploding like spiders across the...

More summaries and resources for teaching or studying The Portable Beat Reader.