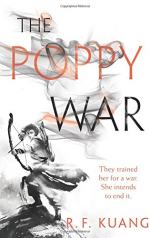 R. F. Kuang
This Study Guide consists of approximately 94 pages of chapter summaries, quotes, character analysis, themes, and more - everything you need to sharpen your knowledge of The Poppy War.

This detailed literature summary also contains Quotes and a Free Quiz on The Poppy War by R. F. Kuang.

The following version of this book was used to create the guide: Kuang, R. F. The Poppy War. Harper Voyager, 2019.

Fang Runin is a war orphan from a small country village in the southern part of Nikara. She is terrified of being married off to an old, rich merchant by her foster parents so she concocts a plan that will allow her to leave her small village. She studies for two years for an Empire-wide test that will allow her to leave her village on a full scholarship to a military academy called Sinegard. Rin tests into Sinegard to the shock of everyone around her and is able to escape the judgement of her village. However, at Sinegard, Rin faces even more discrimination and hardship than she did at her village. She is looked down upon for her low birth and her dark skin color as most of the students are from the upper social classes of Nikan. Rin does meet one friend, a boy named Kitay, and they develop a close friendship. She also makes a rival out of the Dragon Warlord's son, a boy named Yin Nezha. Her rivalry with Nezha results in Rin being banned from her Combat class as the instructor, Master Jun, was a purist who believes those of lower social status should not be at Sinegard Academy. In order to make sure she will pass the Trials and make it to her second year at Sinegard, Rin begins to check out books on marital arts form the library. She practices in the empty courtyard that was supposed to be used for the students’ Lore class but that none of the other students ever visited after their Lore Master reused to show up for any of their classes. During one of her practices, Master Jiang interrupts her and agrees to teach her the subjects that she needs to pass the Trials. As Rin becomes more proficient in the martial arts, Jiang insists that she pledge Lore as not even the famed fifth year Altan had picked up training as fast as she has. At first, Rin does not want to, but the more she learns about what Jiang can do, she realizes that he is her path to true power. Rin inadvertently calls upon a god, The Vermilion Phoenix, during the Trials and Jiang is the only one who is able to calm the fire within her. After, Rin pledges Lore and commits to the path that will make her a shaman and give her access to untold power. Jiang tries to encourage balance within her, but Rin is committed to tipping the scales of power in her favor.

Rin continues her studies under Jiang until the Federation of Mugen, an island off the coast of Nikan, declares war on Nikan. The Federation marches on Sinegard and the students are all drafted into the war. Sinegard almost falls, if not for Jiang and Rin exposing their shamanistic powers. Jiang disappears and Rin is shipped off the Cike division in order to protect her from the infighting of the Twelve Warlords. There she is under the command of Altan Trengsin, a former start pupil at Sinegard and the last of an extinct race called the Speerly. Altan attempts to teach her how to call upon the Phoenix at will while the Cike and several other divisions attempt to hold off the Federation of Mugen from capturing the city of Khurdalain. During the siege, Rin is no closer to calling upon the Phoenix at will but she does make a new friend. Nezha and the Fifth Division are sent as reinforcements for Khurdalain. Rin and Nezha strike up a friendship before Nezha is captured by the Mugen during a gas attack. Soon after, the Cike Seer Chaghan, determines that the Federation is marching on Golyn Niis, the wartime capital of Nikan. When the Cike arrive at Golyn Niis, they find complete and utter devastation. The Federation had done unspeakable atrocities to the civilians and soldiers within its walls and had then kept marching. This genocide angers Rin and Altan. Altan hatches a plan to free the shamans contained within Chuluu Korikh in order to create an unstoppable army. However, when they arrive at Chuluu Korikh, the pair realize the error of their plan and that those within the mountain are vessels for their gods and have lost their humanity. One of the shamans, Feylen, does escape the mountain and disappears before Rin and Altan can contain him. While Rin and Altan were in, the Federation surrounded the mountain and since they cannot call upon the gods while in Chuluu Korikh, Rin and Altan are captured.

Altan and Rin are drugged with opium and taken to the testing facility that Altan was imprisoned in as a child. During an instance where she and Altan are both drugged with opium, Altan takes her on a spiritual journey throughout the past of Speer. Rin receives the blessing of the ghosts of Speer and when they come out of their drugged state, she manages to call down the Phoenix and orchestrate an escape for both her and Altan. However, there are too many Federation soldiers so Altan sacrifices himself so that Rin will be able to swim to the Island of Speer as an escape. While on Speer, Rin discovers the underground temple of the Phoenix and makes a bargain with the Phoenix in order to wipe out the entire Federation of Mugen. She burns with the fire of the Phoenix before she is able to crawl onto the beach of Speer. Three days later, she awakens on a ship that is being sailed by the Cike. Kitay is also on this ship and he informs her of how she completely destroyed the islands of the Mugenese by triggering a long dormant volcano. Kitay is disgusted by her decision to do this but Rin hardly feels any remorse for the death she has caused as she has deemed it a necessity in order to save Nikan. Chaghan and Qara then board the ship, as they had been sent on a mission by Altan to destroy a dam in the northern part of Nikan, thereby flooding the plain below and killing thousands as well. At the end of the novel, Rin realizes that she and other shamans make their own destiny and their choices are not controlled by the gods. She makes the decision to use the gods as tools of destruction and rain down devastation on all of her enemies that are still left on Nikan.

More summaries and resources for teaching or studying The Poppy War.