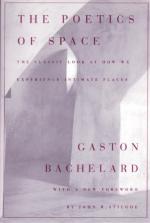 Plot Summary
+Chapters Summary and Analysis
Introduction
The House, from Cellar to Garret, The Significance of the Hut
House and Universe
Drawers, Chests and Wardrobes
Nests
Shells
Corners
Miniature
Intimate Immensity
The Dialectics of Outside and Inside
The Phenomenology of Roundness
Free Quiz
Characters
Objects/Places
Themes
Style
Quotes
Topics for Discussion
Order our The Poetics of Space Study Guide

Gaston Bachelard
This Study Guide consists of approximately 37 pages of chapter summaries, quotes, character analysis, themes, and more - everything you need to sharpen your knowledge of The Poetics of Space.

The Poetics of Space Summary & Study Guide includes comprehensive information and analysis to help you understand the book. This study guide contains the following sections:

This detailed literature summary also contains Topics for Discussion and a Free Quiz on The Poetics of Space by Gaston Bachelard.

Gaston Bachelard is a French philosopher and the author of "The Poetics of Space." Bachelard lived from 1884 to 1962. He is considered one of the leading philosophers of Europe and the author of many other books. The author is known as a modest, unusual man, who matures from a young man working in public administration to become the chairman in philosophy at the Sorbonne, where he is loved and admired by students. Bachelard spends a majority of his career as a scientist and university instructor following specific scientific methods of observation, experimentation, analysis and reasoning. At the twilight of his career, he decides to take a new approach by reflecting on literature and poetry and using imagination to explore a reality that is not subject to reasoning. During this change, he recognizes his acquired knowledge in science is inadequate to understand the poetic imagination.

Science studies objective phenomena, i.e., observable facts or events. Bachelard decides to study the subjectivity of the soul expressed in poetic imagery. Poetry uses images that touch one's soul without apparent cause or observable fact. Poetic imagery stimulates a response in the reader that seems to come from a forgotten image. The author claims that other scientists (psychoanalysts and psychologists) interpret images from their own analytical, biased points of view. In contrast, Bachelard observes that imagination is a major power of human nature. The fact that poetic imagery is not subject to rules of logic does not lessen its reality. The author uses the house, which is full of sensations and subjective imagination native to anyone who lives in one, to demonstrate the reality of poetic imagery. The term "topophilia" is used to describe his comments on happy spaces. Bachelard comments on felicitous or happy space that is eulogized and enjoyed. Hostile space is not considered. Bachelard begins with images of intimacy in the houses of man, and then follows with things in those houses, hidden things, and houses of other animals, nests and shells. He finishes his study of poetic imagery with comments on size and notions of interior and exterior, open and closed spaces, roundness and book subjects.

"The Poetics of Space" is a 241-page, non-fiction philosophical study of inhabited space. The book includes ten chapters plus an introduction but no glossary or index. Chapters range in size from nine to thirty-six pages. Chapter titles name the subject matter. Each chapter has subsection headings in Roman numerals that discuss aspects of the chapter topic. The work is translated into English from its native French. Quoted verses appear in original language followed by an English translation. Two edition forewords provide biographical and other information about the author. Content is complex and its written expression uses and requires extensive and sophisticated vocabulary skills. Many words specific to an academic discipline, i.e. ontology, phenomenology, are used that do not have frequent common usage. This is a challenging and provocative research study in poetic imagery.