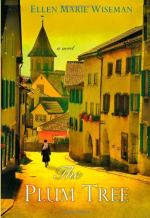 Ellen Marie Wiseman
This Study Guide consists of approximately 42 pages of chapter summaries, quotes, character analysis, themes, and more - everything you need to sharpen your knowledge of The Plum Tree.

This detailed literature summary also contains Quotes and a Free Quiz on The Plum Tree by Ellen Marie Wiseman.

“The Plum Tree” is a historical novel by Ellen Marie Wiseman which recounts the experiences of German civilians before, during, and after World War II through the eyes of young Christine Bolz, from the age of seventeen in 1938 through the summer of 1945.

When the novel begins, Christine dreams of marrying Isaac, the older, handsome son of the people who employ her and her mother as domestics. Christine deeply loves her own family, and dreams of beginning one with Isaac. However, Hitler’s rise to power, as well as new laws, make this impossible because Isaac is Jewish while Christine is a German Christian. Even as things become difficult, Christine and Isaac continue to secretly see one another. Eventually, it becomes too dangerous, and they must stop. Things get even worse in 1940 as Jews and other people deemed inferior by the Nazis are rounded up and taken to concentration camps. Isaac and his own family are taken to Dachau.

Meanwhile, as the war rages and the Allies begin bombing Germany, food and other resources are in short supply for Christine and her family. They scrape to get by, and manage to barely hold on. Christine’s father is forcibly drafted into the Germany army and sent to the Eastern Front to fight the Russians, where he is captured. Isaac is conscripted into a labor detachment that returns him to his home village to repair a nearby airfield, and Christine is thrilled to see he is still alive. She and her mother-–as well as other villagers--begin to secretly leave food for Isaac and his fellow prisoners, for they appear starved. During an escape attempt, Christine hides Isaac in her family’s attic, but is later found out when the SS search the house. She and Isaac are both then sent to Dachau.

In Dachau, Christine sees the horrors of the Holocaust firsthand, from indiscriminate killing and beatings to murder on a mass scale by gassing and cremation. She also knows one of the SS guards, Stefan, who is the boyfriend of Christine’s former best friend, Kate. Christine becomes the cook to an upper-level officer named Grunstein, who one night drunkenly reveals he hates everything going on at the camp and intends to serve as a witness against the atrocities committed there. As the Allies close in on southern Germany, executions increase and Christine believes Isaac has been killed. When the Americans liberate the camp, Christine returns home and befriends an American soldier named Jake.

When Christine sees that Stefan is walking around freely, she outs him only to have Stefan react by falsely accusing Christine’s recently-returned father as a war criminal. Christine then returns to Dachau with Jake’s help, where she is stunned to find Isaac is still alive and helping the Americans. She is also glad to know that Grunstein is alive and actively cooperating with the Americans. A plot is hatched whereby Grunstein writes to Stefan to organize a prison break, and when Stefan arrives at the camp, he is arrested and positively identified by Grunstein. Isaac also reveals that Stefan is the man who killed his father. Christine’s father is released, and Christine and Isaac quickly marry as the novel ends.

More summaries and resources for teaching or studying The Plum Tree.