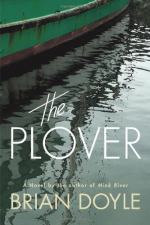 This Study Guide consists of approximately 39 pages of chapter summaries, quotes, character analysis, themes, and more - everything you need to sharpen your knowledge of The Plover.

The Plover Summary & Study Guide includes comprehensive information and analysis to help you understand the book. This study guide contains the following sections:

This detailed literature summary also contains Quotes and a Free Quiz on The Plover by .

“The Plover” is a contemporary fiction novel by Brian Doyle in which Declan O’Donnell takes to the Pacific Ocean in his small fishing boat, the Plover, intending to live away from people but ultimately ends up surrounded by them instead. For reasons never fully revealed, apart from a genetic predisposition to alcoholism, Declan has had a difficult life and so takes to the water from Oregon to be his own man on board the Plover, a boat he purchased used many years ago when he was seventeen. Having outfitted the boat with supplies, spare parts, and several books about Irish Member of British Parliament and conservative philosopher Edmund Burke, Declan takes to the water.

At first, his only company is a herring gull. Initially Declan enjoys being on his own and seeing nothing around him but open ocean, yet this enchantment quickly fades. However, Declan manages to overcome his loneliness and to appreciate the emptiness of the ocean. While Declan is skirting Hawaii, a message is carried to his boat by canoe. The message is from Declan’s friend, Piko, who has come to Hawaii with his disabled daughter, Pipa, following the death of Piko’s wife. Piko has been trying to sort out his life. Piko explains in the message that he had a feeling Declan would be heading in his direction, so he asks to accompany Declan for part of his voyage. Declan readily agrees and takes on Piko and Pipa. It was not what he had planned, Declan thinks, but it is important as a matter of friendship and kindness.

However, disaster soon strikes. An old Russian trawler, the Tanets, run by a man known only as Enrique, bears down on the Plover and kidnaps Piko to force him to become the pilot of the Tanets after the previous pilot, Danilo, was washed overboard in a storm. Declan pursues the Tanets, and under the cover of night Piko makes his escape to the Plover. The next morning, Declan, Piko, and Pipa are stunned to discover a massive Pacific Islander woman on board the Plover named Taromauri. She explains very briefly that she worked for Enrique, but that part of her life is over now. She goes on to explain that following the death of her daughter and the distance of her husband she worked on whatever ships she could find in order to move on.

Declan is wary of Taromauri at first, but agrees to let her stay on. Taromauri quickly bonds with Pipa, who became disabled after being hit by a bus. Through her love and gentleness, and through her speaking with the herring goal who Taromauri recognizes as one of the Thirteen Servants, Pipa, who has been unable to verbalize, begins to speak. Everyone on the boat is thrilled. Over the next few weeks, a warbler, two rats, a government minister, and Danilo all become passengers on board the Plover. Declan is elated and frustrated with the little society that has grown organically on his boat, but he takes refuge in the work of Edmund Burke and finds advice in his words. Meanwhile, Enrique, seeking revenge, bears down on the Plover once more.

Confronted by the rifle-wielding Enrique, Declan sails the Plover past the Tanets, during which time Piko throws a flaming stick into the smokestack of the Tanets, causing it to explode. Enrique, badly burned and in serious need of medical help, is fished from the water. By now, everyone on the Plover except Declan is ready to return to their regular lives. Declan agrees to bring them all back to Hawaii, from which they will make their own ways home. Pipa begs Declan to come with them, but he refuses, saying he must remain on the water. As the journey toward Hawaii gets underway, the herring gull dies, and is ceremonially burned and buried at sea. After dropping everyone off in Hawaii, Declan begins sailing around the islands to head back to open water and feeling elated to be free once more but saddened to be without loved ones. Yet as he heads past a cove he notes with happiness and hope that a green canoe is paddling out to meet the Plover.

More summaries and resources for teaching or studying The Plover.

The Plover from BookRags. (c)2022 BookRags, Inc. All rights reserved.