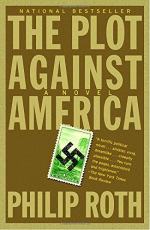 Philip Roth
This Study Guide consists of approximately 36 pages of chapter summaries, quotes, character analysis, themes, and more - everything you need to sharpen your knowledge of The Plot Against America.

The Plot Against America Summary & Study Guide includes comprehensive information and analysis to help you understand the book. This study guide contains the following sections:

This detailed literature summary also contains Quotes and a Free Quiz on The Plot Against America by Philip Roth.

The following version of this book was used to create this study guide: Roth, Philip. The Plot Against America. Vintage, 2005.

The Plot Against America tells the story of an alternate American history in the early 1940s. The story is told by a fictionalized version of the author as he writes about the events of the narrative in the past tense. The novel begins in 1940, with a seven-year-old Philip Roth living in Newark, New Jersey with his Jewish family: his father Herman, his mother, Bess, his 12-year-old brother Sandy, and his orphaned cousin Alvin. The fictionalized author recalls anti-Semitic aviator Charles Lindbergh defeating incumbent President Franklin Roosevelt in the 1940 Presidential election. Lindbergh’s campaign platform was based primarily on keeping America out of the war in Europe, and after he was elected, Lindbergh met with Hitler and signed an agreement in which America would stay out of the war. After Lindbergh’s election, Alvin quit his job and went to Canada to join the Canadian Army and fight against the Nazis overseas. Meanwhile, in June of 1941, the Roths went on a family trip to Washington, D.C. and experienced multiple instances of anti-Semitism directed towards them, as the anti-Semites apparently felt empowered by Lindbergh’s election.

Later, Sandy signed up for a federal program called Just Folks, in which he would live and work on a farm in Kentucky for the summer. Herman was wary of this program, as it was a product of the Lindbergh administration, but Philip’s Aunt Evelyn endorsed the idea. Evelyn had begun a relationship with Rabbi Lionel Bengelsdorf, who has endorsed Lindbergh during the campaign and who was now working for the Lindbergh administration. By the time Sandy returned from his summer on the farm, he was enamored with the way of life he had experienced there, and enamored of Lindbergh as well. Meanwhile, Alvin had lost his left leg below the knee and combat and had returned to Newark to live with the Roths. Animosity soon grew between Alvin and Sandy, as Sandy admired Lindbergh, while Alvin despised Lindbergh. Alvin attempted to work in the neighborhood, but he was soon unable to find work when the FBI began to investigate him due to his opposition to Lindbergh. So, Alvin went to Philadelphia to work for Jewish organized criminals based there. Meanwhile, a neighbor of the Roths named Mr. Wishnow killed himself after being sick with cancer for a long time. The man’s son, Seldon looked to Philip for comfort and friendship, but Philip did not like to be reminded of the death of Seldon’s father, and he did not like Seldon’s emotional neediness.

In May of 1942, the Lindbergh administration instituted a new program called Homestead 42, in which they incentivized companies to relocate their Jewish employees to predominantly non-Jewish areas of the country. The insurance company that employed Herman and Mrs. Wishnow decided to participate in the program. Radio commentator Walter Winchell expressed his outrage for the program and decided to enter the American political stage to oppose Lindbergh. Herman quit his job so that the Roths would not have relocate, but the Wishnows were relocated to Kentucky. Winchell traveled the country making speeches against Lindbergh, and anti-Semitic riots began to occur across the country in reaction to these speeches. Winchell was soon assassinated in Kentucky, and in response Franklin Roosevelt re-entered the political stage to oppose Lindbergh. Lindbergh then flew to Kentucky to address the crowds there, but on his solo flight back to Washington, his plane disappeared. Vice President Burton Wheeler then declared martial law, but he was soon deposed, and the country held special lections for the Presidency and for Congress. Franklin Roosevelt won the Presidency in a landslide, and the democrats won an overwhelming majority of seats in Congress. America then entered World War 2. Meanwhile, during Wheeler’s reign of martial law, Mrs. Wishnow was killed by anti-Semites in Kentucky, so Herman drove to Kentucky, retrieved Seldon, and brought him back to Newark. Seldon lived with the Roths for ten months before going to live with his aunt and uncle.

More summaries and resources for teaching or studying The Plot Against America.

The Plot Against America from BookRags. (c)2022 BookRags, Inc. All rights reserved.