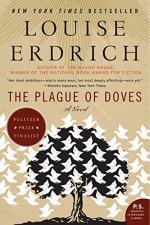 Louise Erdrich
This Study Guide consists of approximately 48 pages of chapter summaries, quotes, character analysis, themes, and more - everything you need to sharpen your knowledge of The Plague of Doves.

The Plague of Doves Summary & Study Guide includes comprehensive information and analysis to help you understand the book. This study guide contains the following sections:

This detailed literature summary also contains Quotes and a Free Quiz on The Plague of Doves by Louise Erdrich.

NOTE: Due to the structure of the novel, this study guide specifically refers to the 2009 First Harper Perennial paperback edition. Quotes and references in this study guide refer to page numbers rather than paragraphs.

“The Plague of Doves” is a spiritual novel occurring over the course of the last five decade by Louise Erdrich. "The Plague of Doves" recounts the lives, misfortunes, and choices of the citizens of Pluto, North Dakota, all revolving around an old, unsolved murder. The reader should also note in advance that the structure of the novel recounts events, both past and present, as if they were occurring simultaneously. This requires close reading to ensure that events are properly understood in their context.

The novel opens through the eyes of half-white, half-Native American girl Evelina Harp, who recounts her family’s deep roots not only in the area around Pluto, but in Catholicism. Evelina’s own grandfather, Mooshum, ran away with the girl who would become her grandmother rather than join the priesthood during the time when the largest flock of doves ever seen descended on the area.

In the 1960s, when Evelina is 12, she has her first kiss with a boy named Corwin Peace, and hopes her life will be full of romance the way the lives of her parents and grandparents have been.

Evelina also learns from Mooshum about the grisly 1911 murder of all but one member of the Lochern family, a baby who miraculously survived. Evelina learns that a group of locals, including many prominent members of the community who can trace their origins back to the founding of the town, formed a lynch mob to find the killer. Mooshum explains that the mob targeted a group of innocent Indians, including himself, for the murder. Mooshum recounts that the Sheriff and a veteran military officer tried to stop the lynching, but were held back. Mooshum explains that while the other three Indians were hanged, he was saved at the very last minute by Eugene Wildstrand.

Judge Antone Coutts, who is descended from the first settlers in the area, has a unique place in the town in the law, for he is well aware of family drama and the town’s dark history. Everything ultimately gets back to him. Coutts notes that there is nothing that occurs in Pluto that is not a question of blood, for from sexual affairs to the murders, everything is connected by family, close or distant. Indeed, during the course of the novel, Coutts romances and marries Evelina’s aunt, Geraldine.

Coutts explains much of this family drama throughout the novel, noting that the older banker John Wildstrand and much younger Native American Maggie Peace had an affair, giving birth to Corwin Peace. Maggie’s brother, Billy, cooked up a robbery and kidnapping scheme with John to steal money from the bank to provide for Maggie, but the kidnapping plot ultimately came undone. As a result, Coutts reveals, John killed himself and Billy sought to reform his life by going into the ministry. Coutts explains that Billy ultimately married a girl named Marne Wolde, on whose family land the lynching of Mooshum’s friends transpired many years before. Marne’s parents, Marne explains, died a few years after she was married, while her crazy uncle was committed to a state mental institution. In the present, Marne herself explains that Billy ultimately became fanatical and abusive, leading Marne to kill Billy to get away with her children.

Marne befriends Evelina while working as a waitress with her at a diner. Evelina soon after heads off to college, where she does field work at the state mental institution. There, she tends unknowingly to Marne’s uncle, Warren, who always finishes his conversations with threats to “kill them all.” While at the institution, Corwin comes to visit Evelina, bringing along his violin to play music. While at the institution, Evelina has a brief lesbian romance with a patient named Nonette, then returns home and decides to marry Corwin. Meanwhile, Coutts, who has only recently married Geraldine, recalls his first love with a much older woman he refers to as “C” when he was only 17.

“C” turns out to be Cordelia Lochern, the sole survivor of the 1911 murders. Cordelia, now in her seventies, reflects sadly on the history of the town. She notes that the founding families named the town “Pluto,” not knowing Pluto was the Greek god of the underworld. Cordelia, who has spent much time researching the town’s history, explains that she believes the murderer of her family to be Warren Wolde. Throughout her life, she received cash from an anonymous source. Upon Warren’s death, she receives a massive sum of cash once more. Cordelia also notes how, as a young doctor, she once had to tend to Warren’s injuries, and remembers how Warren was startled and scared to see her at first. At the time, Cordelia thought little of this, imagining Warren to be in severe pain. Now, she realizes there must have been a strong family resemblance between her and her family members Warren killed. The institution’s staff also notes that Warren died the day Corwin Peace played violin music for Evelina – the same musical instrument playing on the gramophone when Warren killed Cordelia’s family.

More summaries and resources for teaching or studying The Plague of Doves.

The Plague of Doves from BookRags. (c)2022 BookRags, Inc. All rights reserved.