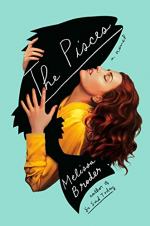 Melissa Broder
This Study Guide consists of approximately 43 pages of chapter summaries, quotes, character analysis, themes, and more - everything you need to sharpen your knowledge of The Pisces.

The Pisces Summary & Study Guide includes comprehensive information and analysis to help you understand the book. This study guide contains the following sections:

This detailed literature summary also contains Quotes and a Free Quiz on The Pisces by Melissa Broder.

The following version of this book was used to create this study guide: Broder, Melissa. The Pisces. London: Hogarth, 2018.

Melissa Broder’s The Pisces opens by introducing the novel’s heroine: 38-year-old Lucy, a Phoenix-based Ph.D. student who has been procrastinating on completing her thesis on Sappho for nine years. She is hyper-observant, critical, and suffers from depression, routinely reflecting on the emptiness of life. After eight years, her relationship with her boyfriend Jamie has become stagnant, and Lucy no longer feels attracted to him. After suggesting they take a break, she immediately regrets it when he agrees. Her depression escalates and when she learns he is seeing someone else she punches him in the face and breaks his nose. The police come and suggest she start therapy. Then, she nearly overdoses on Ambien and wakes up in her car covered in doughnuts. The same police officer finds her like this and calls her older half-sister, Annika.

Annika invites Lucy to her Venice Beach house for the summer, saying she needs someone to dog-sit while she and her husband Steve are away. She enrolls Lucy in group therapy for sex and love addicts, as mandated by the police officer in exchange for not pressing charges. Lucy settles in and begins therapy, critical of the eccentric women and their absurd stories, and thinking she cannot possibly be as pitiful as them. One night, while walking along the ocean, she meets a mysterious, beautiful young swimmer perched by the rocks named Theo. Meanwhile, she begins going on Tinder dates, seeking fulfillment and excitement in casual sex, which the author describes in graphic and explicit detail. Her first date, with Adam, turns out horrifically, and she avoids having sex with him by convincing him to masturbate in front of her. Her second Tinder date, with an attractive man named Garrett, turns out even more horrifically. He asks her to play out his fantasy of having sex in a hotel bar bathroom and in after a painful, failed attempt at intercourse, he reverts back to her vagina, and she contracts a UTI. Meanwhile, during nightly walks, she continues to get to know Theo.

Her friend from group therapy, Claire, calls her saying that she has hit a low point and is considering suicide and Lucy manages to talk her out of it. Later, she goes to the rocks again and by this time, her relationship with Theo has increased in intimacy and she nervously allows him to perform oral sex on her while she leans back on the rocks. She is amazed to find genuine, caring, and fulfilling pleasure for the first time. When she asks him to come out of the water, he is shy, saying he is afraid she will judge him. She is shocked to discover that he is a merman.

Lucy and Theo’s relationship quickly escalates and after another sexual encounter on the rocks, they agree to plot a way for him to come back home with her. Lucy ignores Claire’s calls and texts and purchases a wagon so that she can load him into it and bring him to her sister’s house. He is terrified of dogs, so she locks Dominic into the pantry and gives him tranquillizer pills to quiet his barking. They have sex on her sister’s couch and over the next little while, they develop a routine of coming to the house and having sex. She occasionally feels physically sick, recognizing the improbability of their relationship and her impending departure back to Phoenix, but falls deeper and deeper into love. In the meantime, Claire tries to commit suicide, and Lucy receives a call from her husband saying she is in a psych ward at the hospital. She goes to visit her several times.

Her new routine consists of time with Theo, during which she would put Dominic out with tranquillizers, and while they are apart, she worked on her thesis. Inspired by their time together, she abandons the theoretical, dry approach she was following before and starts to instead write about Eros in the texts of Sappho. Eventually, she tells Theo that she will be leaving at the end of the summer, and she is surprised when he reacts so strongly. She was so blinded by her own issues of abandonment that she did not think someone else could need her. Heartbroken, he insists on going back to the water and says goodbye to her.

Night after night, she returns to the water waiting, hoping and praying that he will return to her. She suffers from symptoms of withdrawal, panic, and depression. She starts going back to her group therapy and in an attempt to feel something again, she has sex with her Uber driver, Chase. After, her advisory committee call to inform Lucy that while they love the new direction of her thesis, because it is not traditionally academic, the university will not be funding her studies anymore, and she will no longer have a place there.

One night, after falling asleep on the rocks, Theo returns to her and wakes her up. He explains that after watching her never give up on him, he felt reassured of her love. He says he is finished with land though and asks her if she will come under water with her. Lucy is not sure what he is implying, and he ambiguously does not correct or confirm her assumption that she would be drowning, but she does not want the perfection of the moment and of their love to be broken so she agrees. She just needs to put her affairs in order. When she returns to the house, she finds that in her absence and continued neglect and abuse, Dominic was dead in the pantry. Her sister comes home immediately, devastated that the dog she loved as a child is dead, and Lucy feels overcome by guilt and self-loathing. Her sister begs her to stay, but Lucy packs and says goodbye, heading to the ocean to meet Theo.

Afraid but also excited, Lucy finds Theo at the rocks with a rope. He explains that he will help her go under but will never push her more than she wants to be pushed and that it has to be her own will. He promises that it will be beautiful, they will make love under the water and will be together for a long time. But when she realizes that he has brought other women down there, she no longer feels special and the magic of the moment is broken. She looks at him differently and it occurs to her that she had met someone who had an even stronger need to be pursued and loved than her and that it was part of his game to make her agree to come under with him. She decides to say goodbye to him forever and returns home to her sister.

More summaries and resources for teaching or studying The Pisces.

The Pisces from BookRags. (c)2022 BookRags, Inc. All rights reserved.