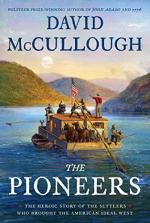 David McCullough
This Study Guide consists of approximately 39 pages of chapter summaries, quotes, character analysis, themes, and more - everything you need to sharpen your knowledge of The Pioneers.

The Pioneers Summary & Study Guide includes comprehensive information and analysis to help you understand the book. This study guide contains the following sections:

This detailed literature summary also contains Topics for Discussion on The Pioneers by David McCullough.

The following version of this book was used to create the guide: McCullough, David. The Pioneers. Simon & Schuster, 2019.

The Pioneers by David McCullough traces the development of the first Ohio settlement beginning in the 1780s through to the mid-nineteenth century. He employs a vast array of primary sources in order to depict the changing lives and the personal intentions of several key figures whose actions gave rise to American prosperity and westward expansion. The book is divided into ten chapters, each of which addresses a period of time or a specific subject in relation to the settlement, moving in a general chronological order through the history of the state.

"The Ohio Country" introduces the Reverend Mannaseh Cutler and General Rufus Putnam, whose lobbying efforts and strategizing led to the establishment of the Northwest Ordinance which allowed for the creation of a state west of the Ohio River. "Forth to the Wilderness" describes the initial foray into the West and the establishment of the settlement of Marietta which lay near both the Ohio and the Muskingam Rivers. Very quickly, the male settlers put down roots.

"Difficult Times" describes some major problems at the frontier in Marietta, as food shortages abounded, political turmoil with natives indigenous to the land arose, and other obstacles prevented the settlement from expanding as quickly as expected. Soon, as a result of a fraudster's exploitation of the Northwest Ordinances stipulations, a large group of French immigrants arrived in Ohio, having been promised land and a fresh start away from the French Revolution taking place in their native country. These immigrants did not receive the things promised to them but reveled in the freedom they found in Ohio, making do for themselves alongside the American settlers. "Havoc" then recounts the war between the natives and the settlers which occupied the settlers' attention beginning in 1791. General Arthur St. Clair, charged with eliminating the native threat, suffered a humiliating defeat which became infamous, leading to General Anthony Wayne having to take over for St. Clair. He defeated the natives two years after St. Clair's defeat and limited native habitation to an area further north and west of the Ohio River.

In "A New Era Commences," McCullough describes how Ephraim Cutler, son of the Reverend Cutler, moved his family to the frontier, where he rose to prominence by virtue of his work ethic and natural skills. His influence was such that he was elected delegate to Ohio's territorial legislature, worked to prevent the introduction of slavery in the state, and established a state university in accordance with his belief that education was of primary concern to humanity. "The Burr Conspiracy" traces the course of a small national crisis which arose when Colonel Aaron Burr, an infamous and disgraced political figure, was charged with encouraging rebellion against Washington in Ohio.

"Adversities Aplenty" then proceeds to outline the myriad challenges facing Marietta's residents as the settlement grew into a large town. The diseases and food shortages its residents faced were tempered by the resilience and helpful attitudes of ordinary people. "The Cause of Learning" then explains how Ephraim Cutler put public education at the center of his life's mission, lobbying in Washington and elsewhere to bring Ohio enough resources to establish a public school system modelled after that of New England.

Finally, "The Travelers" and "Journey's End" describe the successes and lasting impact of the settlement of Marietta. The ideals borne out by the actions of several of its key figures helped to create the idea of the American 'dream' so often discussed, and several prominent international visitors were surprised at the unique culture of this western settlement of the United States. The complete rejection of slavery in Ohio was one of the main accomplishments which the Reverend Cutler and General Rufus Putnam had wanted to preserve and which their descendants, both literal and ideological, strove to uphold.

More summaries and resources for teaching or studying The Pioneers.

The Pioneers from BookRags. (c)2022 BookRags, Inc. All rights reserved.