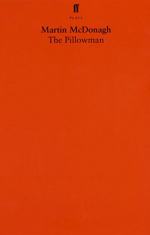 Martin McDonagh
This Study Guide consists of approximately 44 pages of chapter summaries, quotes, character analysis, themes, and more - everything you need to sharpen your knowledge of The Pillowman.

The Pillowman Summary & Study Guide includes comprehensive information and analysis to help you understand the book. This study guide contains the following sections:

This detailed literature summary also contains Quotes and a Free Quiz on The Pillowman by Martin McDonagh.

The following version of this book was used: McDonagh, Martin. The Pillowman. Farrar, Straus and Giroux. 2003.

The Pillowman is a three-act play set in the police station of a totalitarian dictatorship. The first acts have two scenes in them, and the final act has just one single scene. Act 1, Scene 1 begins with the fiction writer, Katurian, sitting blindfolded in a police interrogation room. The lead detective on multiple-homicide case, Tupolski, and his lower-ranking partner, Ariel, enter the room and begin interrogating Katurian. They do not, at first, tell him why he has been brought into the interrogation room. Instead, they play mind games and threaten him and taunt him into revealing why he thinks they have brought him in. Katurian is confused by their behavior, but suspects that his stories, which Tupolski has with him, might have something to do with the matter. In his country, fiction is monitored and given guidelines, and he worries that he is being accused of writing political stories. After Ariel beats Katurian, Tupolski summarizes Katurian’s story, “The Little Apple Men,” om which a little girl is killed by razor-infused apples. The detectives tell Katurian that his mentally impaired brother, Michal, is in custody, and they threaten to beat him. Katurian pleads for his brother, but Ariel leaves to go torture him. Tupolski makes Katurian read his short story, “The Tale of the Town on the River,” in which a boy’s toes are chopped off. The screams of Michal being tortured by Ariel echo down the hall and then Ariel returns with blood on his hands. Tupolski shows Katurian a box of toes that was found in Katurian’s house and tells him that a boy and a girl were killed, just like in Katurian’s stories, and a third girl is missing. Ariel says that Michal has just confessed to the murders, but the police are convinced Katurian is the mastermind behind them. Katurian says that he believes he and his brother are being unfairly accused and refuses to say anything else until he sees his brother. Tupolski goes to get electrodes to torture Katurian with.

In Act 1, Scene 2, Katurian narrates and acts out one of his stories: “The Writer and the Writer’s Brother.” In the autobiographical story acted out by Katurian, the young boy is loved and adored and given every opportunity by his parents. He discovers inside himself a love of writing, and begins writing fictional stories. When he is seven, he begins to have nightmares about the strange noises coming from the locked door next to his bedroom. His parents reassure him, and he continues to write, but his nightmares get worse. The worse his nightmares get, however, the better his writing gets. When he is fourteen, he discovers that his parents have been torturing his brother behind the locked door in order to make the boy a better writer. They move to another house and, years later, when the boy has published a novel, he returns to his old house and discovers the corpse of his brother lying in his bed, holding the manuscript of a story better than anything the boy has ever written. Katurian, through narration, then explains that the end of the story is fictional. In reality, when he discovered that his parents had been torturing Michal for years, until his mind snapped, Katurian killed his mother and father by suffocating them with a pillow.

Act 2, Scene 1 is set in Michal’s holding cell, thinking about his favorite Katurian story, “The Little Green Pig.” Katurian is brought in, bloody from the torture, and discovers that the police were lying about torturing Michal. Katurian tells Michal his story, The Pillowman, which is about a man who is tasked with finding children who grow up to lead such miserable lives they kill themselves and convincing those children to kill themselves before the misery begins. This job makes him so sad that he goes back and convinces his younger self to kill himself. Michal admits to Katurian that he killed the children because he wanted to test out Katurian’s stories. Katurian tries to find out how Michal killed the third girl, and Michal tells him that he used “The Little Jesus” as a model and that he buried her in their backyard where Katurian had buried their parents. This enrages Katurian, who tells Michal that he is going to go to a hell in which their parents will torture him eternally. Michal says Katurian can make up for the mean comment by telling him “The Little Green Pig” story, which is upbeat and childish. Katurian does so, and then he suffocates Michal with a pillow. He calls for the guards and tells them that he wants to confess the truth in exchange for amnesty for his stories.

In Act 2, Scene 2, “The Little Jesus” is acted out on stage. In the story, a young girl is convinced she is the reincarnation of Jesus Christ. When her parents are killed in a car accident, she is sent to live with foster parents that abuse and mistreat her, but she never gives up hope. One day, they ask her if she really wants to be like Jesus. She says she does, and they crucify her on a cross and stab her in the side. When she does not die, they put her in a glass coffin and bury her alive. Unlike Jesus, she does not rise up three days later.

In the third and final act, Katurian confesses to all six murders and then tells Tupolski and Ariel where to find the third girl. Ariel reveals that his life’s mission is to save children from monsters like Katurian, and Katurian rightly guesses that Ariel experienced abuse as a child. Ariel leaves Tupolski alone to make arrangements for a police squad to find the third girl, in case she is still alive. Tupolski tells Katurian a story that he once wrote and then tells Katurian that he liked some of Katurian’s stories. He promises to keep them on file, as per their agreement, as a man of his word, and then they discuss the logistics of Katurian’s execution. Ariel comes back in with the third girl, who had been painted green and left alone and unharmed with some pigs, as in Michal’s favorite story. Ariel questions Katurian and discovers that he only confessed in order to save his stories. Tupolski, however, decides not to honor their agreement since Katurian was supposed to have given the truth in exchange for amnesty, and he did not tell the truth. Tupolski executes Katurian and tells Ariel to burn his stories before leaving the room. Katurian rises from the stage floor as a ghost/narrator and explains that in his final moments, he envisioned a story for Michal in which the Pillowman came for Michal as a boy and asked him to kill himself to avoid all the misery of his upcoming life, but Michal decided to sacrifice himself in order to inspire Katurian’s writing. The play ends with Ariel deciding to put the stories in the case file, where they will be stored and sealed for fifty years, rather than burning them.

More summaries and resources for teaching or studying The Pillowman.

The Pillowman from BookRags. (c)2022 BookRags, Inc. All rights reserved.