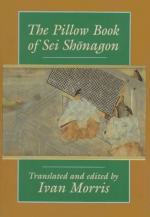 The Pillow Book of Sei Sh¯onagon, Translated [from the Japanese] and Edited by Ivan Morris - Sections 13-24 Summary & Analysis

Sei Shōnagon
This Study Guide consists of approximately 32 pages of chapter summaries, quotes, character analysis, themes, and more - everything you need to sharpen your knowledge of The Pillow Book of Sei Sh¯onagon, Translated [from the Japanese] and Edited by Ivan Morris.

Section 15 is a vignette about a lovely day when Shonagon overheard His Majesty playing the flute outside after a flute lesson. Shonagon hears the Emperor saying that nobody could possibly hear him play so he was going to really let himself go. Shonagon thinks this is most delightful.

Sections 16 and 17 are also lists. Section 16 describes things that make one's heart beat faster such as sleeping in a room where lovely incense is burning, watching babies play, and seeing a suitor arrive at one's house and ordering the servants to announce him. Section 17 lists things that evoke pleasant memories from the past...

More summaries and resources for teaching or studying The Pillow Book of Sei Shonagon, Translated [from the Japanese] and Edited by Ivan Morris.

The Pillow Book of Sei Sh¯onagon, Translated [from the Japanese] and Edited by Ivan Morris from BookRags. (c)2022 BookRags, Inc. All rights reserved.