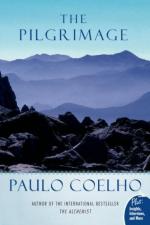 Paulo Coelho
This Study Guide consists of approximately 36 pages of chapter summaries, quotes, character analysis, themes, and more - everything you need to sharpen your knowledge of The Pilgrimage.

At two o'clock one afternoon Petrus and Paulo come across a medieval column supporting a cross; it is a road marker for pilgrims. Petrus tells Paulo to kneel before it so that they can offer a prayer concerning Paulo's personal vices. These vices are the only thing that could potentially defeat Paulo after he finds his sword. Petrus then speaks a lengthy prayer asking God to pity people who eat and drink but are still unhappy; who fear death; who consume themselves with affairs of the heart; for those who do not believe in anything spiritual, and for those who are concerned only with their own lives. When he finishes praying Petrus sits quietly staring across the surrounding wheat fields.

Petrus' prayer is a little out of place and disconcerting. The guide rambles on naming...

More summaries and resources for teaching or studying The Pilgrimage.

The Pilgrimage from BookRags. (c)2022 BookRags, Inc. All rights reserved.