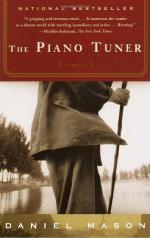 Daniel Mason
This Study Guide consists of approximately 73 pages of chapter summaries, quotes, character analysis, themes, and more - everything you need to sharpen your knowledge of The Piano Tuner.

This detailed literature summary also contains Topics for Discussion on The Piano Tuner by Daniel Mason.

Edgar Drake, a piano tuner living in Victorian London, is commissioned by the army to travel to Burma to fix the piano of Surgeon-Major Carroll. Edgar sets off on the long journey and encounters many different cultures on the way. Eventually he reaches Mae Lwin in Burma and fixes the piano. He plays music for a local Prince, which helps to convince the Prince to sign a peace treaty. Meanwhile, Edgar develops feelings for a beautiful Burmese woman called Khin Myo. Just as he is coming to love Burma, however, Mae Lwin is attacked and he is forced to leave. He is picked up by the British, who accuse him and Carroll of being traitors. He learns that just three days after the peace treaty, the Shan Princes attacked British forces. Edgar manages to escape and tries to run back to Mae Lwin, but he is shot.

Edgar is called to the War Office in London to see Colonel Killian, who commissions him to fix and tune a piano in Burma belonging to Surgeon-Major Carroll. Edgar agrees. When his wife, Katherine, finds out, she is upset, but she encourages him to go. He packs, and boards a ship to France. From France he boards a ship to India. While on board the ship, he hears the tale of the Man with One Story, who tells him about music so powerful and beautiful that it made him deaf.

At Bombay Edgar catches a train through India, then a ship to Rangoon in Burma. He is met by an officer called Dalton, who invites him to go hunting with him and two other officers. They hunt a tiger that has been troubling a local village, but Witherspoon accidentally shoots and kills a young Burmese boy. Edgar is devastated by this.

Edgar boards a boat going upriver from Rangoon to Mandalay in northern Burma. At Mandalay he is met by Captain Nash-Burnham who is more appreciative of local culture than other officers, taking Edgar to see local street theatre. Edgar meets Khin Myo at Mandalay, a beautiful Burmese woman whose job it is to look after the army's guests. Edgar's trip to Mae Lwin is delayed when the village is attacked, but when Edgar receives a letter from Carroll begging him to come, he goes ahead without his army escort. He, Khin Myo, and one of Carroll's men called Nok Lek, travel to Mae Lwin. They are attacked by bandits on the way, but they manage to get away.

At Mae Lwin, Doctor Carroll shows Edgar the local scenery and tells him about the people and their myths. He also shows Edgar the surgery where he helps cure the local Shan people. He then shows Edgar the piano and Edgar sets about fixing it. As Edgar stays in Mae Lwin he begins to fall in love with the place and to develop feelings for Khin Myo, who is in a relationship with Carroll. One day Carroll asks Edgar to play a piece of music for the visiting Shan Prince of Mongnai. Edgar chooses a piece that conveys a sense of beauty through order, which he hopes will promote the singing of a peace treaty. This is successful, and the Prince leaves happy, promising to arrange a meeting with the Limbin Confederacy who are currently defying British rule.

Later, Carroll asks Edgar to accompany him on a journey to a local town. When they arrive, Carroll reveals that this is actually a meeting of the Limbin Confederacy to sign a peace treaty. Carroll wants Edgar to pretend to be a British officer so that the Shan Princes will think this is legitimate and officially sanctioned. Edgar is annoyed at being manipulated in this way, but does not have much choice. He goes along with it, and a peace treaty is signed.

A few days later, Mae Lwin is attacked. Carroll tells Edgar he must leave with the piano. They strap it to a raft and Edgar, accompanied by two boys and Nok Lek, set off down the river. They are captured by British officers and the three boys are shot. Edgar is told that he is suspected of being a traitor along with Carroll. Limbin forces have attacked British troops, and the British suspect that Carroll was really signing an alliance with them against the British. They believe that some of his notes containing chemical formulae and Shan music were actually code. Edgar tries to argue but they will not listen. When Nash-Burnham gives him the chance to escape, Edgar runs away. He tries to reach Mae Lwin but gets lost. As he is running along a road, he is shot from behind.

More summaries and resources for teaching or studying The Piano Tuner.