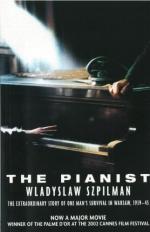 The Pianist: The Extraordinary Story of One Man's Survival in Warsaw, 1939-1945 Summary & Study Guide

Władysław Szpilman
This Study Guide consists of approximately 23 pages of chapter summaries, quotes, character analysis, themes, and more - everything you need to sharpen your knowledge of The Pianist.

The Pianist: The Extraordinary Story of One Man's Survival in Warsaw, 1939-1945 Summary & Study Guide Description

The Pianist: The Extraordinary Story of One Man's Survival in Warsaw, 1939-1945 Summary & Study Guide includes comprehensive information and analysis to help you understand the book. This study guide contains the following sections:

This detailed literature summary also contains Topics for Discussion on The Pianist: The Extraordinary Story of One Man's Survival in Warsaw, 1939-1945 by Władysław Szpilman.

"The Pianist" by Wladyslaw Szpilman tells the true story of a Jewish pianist who lived in Warsaw, Poland during World War II. This is the story of his family and of his survival during the war as the Germans invaded his city.

Wladyslaw worked as a pianist in the heart of the Warsaw ghetto. Life was not easy for his family and they sold everything they possibly could, including his piano. Nonetheless, he was happy he had work. The atmosphere at his job was very different from outside where the streets were filled with smuggling and death. The winter took its toll on the poverty-stricken people as a typhus epidemic broke out in the ghetto. Dead bodies lined the streets.

The residents in the city began to hear bombs in the distance, and they knew that war with Germany was inevitable. The German artillery showed up in the city, and soon conditions began to deteriorate. The Jews were given a list of rules and regulations, they were treated as outsiders, and the city was getting destroyed. There were harsh repercussions when rules are broken. The repercussions included beatings and death.

The Germans mocked the Jews and rounded them up for labor and then things got even worse. The Germans would run into buildings and begin killing people in a horrific manner. The Germans chose large groups of Jews for resettlement. Wladyslaw's family was selected, but he was separated from them as they were herded onto the train. Later, he discovered that they were sent to their death.

The physical labor Wladyslaw had to take part in was brutal.The workers had little food, and the food wasn't very nourishing. If the workers became weak and slowed down at work, they were beaten. At one point, Wladyslaw was worried about the oncoming winter because he knew with his hands got frostbite, he wouldn't be able to play the piano. He twisted his ankle and was no longer good for outdoor work so he got to work indoors and his hands were saved. There were more selections and rumors of a settlement in the ghetto, and Wladyslaw knew that he had to take drastic action. He escaped and went into hiding.

While he was in hiding, Wladyslaw had to contend with monotony, limited food, and health issues. He was extremely reliant on others for provisions, and the others didn't always come through. The Germans began to suffer numerous defeats, which offered hope. However, it was still far from peaceful in the city. A rebellion broke out. At one point, Wladyslaw's building was surrounded by Germans and set on fire. Still, he remained where he was.

And another point, was building was set on fire. Wladyslaw took a large quantity of pills to kill himself, but they didn't work. Instead, he woke up the next day in a smoldering building. Over the next few months, he fought starvation, frigid temperatures, and madness as he hid from the soldiers. At one point, a German officer found him, and the man ended out saving his life by bringing him food and helping him keep warm. He tried to find the officer to help the officer after the war was over, but his efforts to find the man failed.

More summaries and resources for teaching or studying The Pianist: The Extraordinary Story of One Man's Survival in Warsaw, 1939-1945.

The Pianist: The Extraordinary Story of One Man's Survival in Warsaw, 1939-1945 from BookRags. (c)2022 BookRags, Inc. All rights reserved.