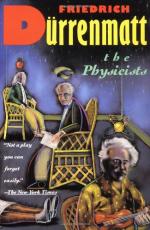 Friedrich Dürrenmatt
This Study Guide consists of approximately 24 pages of chapter summaries, quotes, character analysis, themes, and more - everything you need to sharpen your knowledge of The Physicists.

The Physicists Summary & Study Guide includes comprehensive information and analysis to help you understand the book. This study guide contains the following sections:

This detailed literature summary also contains Topics for Discussion on The Physicists by Friedrich Dürrenmatt.

The Physicists starts with the murder of a nurse in Les Cerisiers, a European mental institution. Inspector Richard Voss and the local police force investigate the murder scene, which is the drawing room of a villa within Les Cerisiers. This villa is the home of three mental patients who believe they are great physicists.

A man named Ernesti killed the nurse. Ernesti believes he is Albert Einstein, and he frequently plays the violin as the real Einstein did. This has been the second murder of a nurse at the same villa. Three months ago a man named Beutler, who believes himself to be Sir Isaac Newton, killed a nurse. The Inspector cannot arrest anyone because they are legally insane and the residing Doktor, Fraulein Mathilde Von Zahnd, has a very sympathetic and blameless approach with her mental patients.

The third physicist, named Johann Mobius, believes he is visited by King Solomon, and he takes dictation about physics from Solomon. The family of Mobius visits, including his ex-wife, her new husband, and Mobius's three children. They are bidding a final farewell before they leave to do missionary work on an island in the Pacific Ocean. Mobius pretends to be violently insane, cursing the family and throwing a coffee table, so that he cuts ties with his family and spares them any further pain from trying to have a relationship with a madman. Nurse Monika reveals that she is in love with Mobius and wants to run away with him. The previous two murdered nurses also fell in love with a "physicist," and Monika is murdered like the others for getting too close.

In Act II, the Inspector returns to investigate the murder of Nurse Monika. Again, he can do nothing because Mobius is insane. A series of revelations follow. Newton reveals to Mobius that he is in fact a secret agent named Kilton, who faked insanity in order to infiltrate the villa. His mission is to bring Mobius and his great scientific discoveries back to his country for military purposes. Similarly, Einstein reveals himself to be a secret agent for another country, Eisler, who has pretended insanity for the same reason. It turns out that Mobius also merely pretended to be insane, but for a different reason: In the era of nuclear weapons, he wished to hide his dangerous scientific discoveries from a world that might destroy itself with such knowledge. While both Newton and Einstein urge Mobius to side with them and share his discoveries, Mobius convinces the men to keep the knowledge hidden for the benefit of mankind and continue to pretend insanity.

In a final revelation, the matronly Doktor reveals herself as the only insane one, one who truly does receive visions of King Solomon. She has manipulated the physicists, and has secretly gathered all of Mobius's knowledge for herself by copying his manuscripts. She plans to conquer the world per Solomon's commands using this knowledge. The physicists are doomed to a sane life in the madhouse, while the Doktor continues her insane plans in a world that thinks she is sane.

More summaries and resources for teaching or studying The Physicists.

The Physicists from BookRags. (c)2022 BookRags, Inc. All rights reserved.