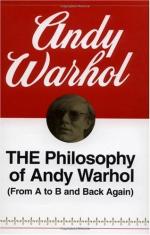 Andy Warhol
This Study Guide consists of approximately 31 pages of chapter summaries, quotes, character analysis, themes, and more - everything you need to sharpen your knowledge of The Philosophy of Andy Warhol.

The Philosophy of Andy Warhol Summary & Study Guide includes comprehensive information and analysis to help you understand the book. This study guide contains the following sections:

This detailed literature summary also contains Topics for Discussion and a Free Quiz on The Philosophy of Andy Warhol by Andy Warhol.

The Philosophy of Andy Warhol (From A to B and Back Again) by Andy Warhol is a nonfiction account of Andy Warhol's perspectives and opinions. Andy's topics include the esoteric as well as the mundane as he rambles his way through a variety of subjects which have become important to Andy at some time in his life. Through the disconnected and sometimes disjointed philosophizing, the reader begins to understand Andy the man and Andy the artist. Andy's completely unselfconscious look into his life lets the reader glimpse into Andy's celebrity life without really seeing much at all.

Andy is afflicted with a nervous system disorder called St. Vitus Dance as a young boy and spends much of his childhood in bed with his paper doll cut outs and a Charlie McCarthy doll. Because of his frailty, Andy's mother encourages quiet activities such as reading and drawing, both of which will help build the foundation on which Andy's career will be built.

Andy's job at a department store one summer brings Andy in contact with a boss who is from New York City, and Andy becomes enthralled by the idea of the big city. When he is eighteen years old, Andy leaves Pennsylvania for New York and lives the typical starving artist life in an apartment crowded with other young people trying to make his or her way in the big city. Before long, Andy lands a job at Harper's Bazaar magazine, which is his entrée into commercial art.

Andy eventually opens his own art business in the early 1960s, and employs a few people at Andy Warhol Enterprises. Riding the wave of free love and radical thinking of that time period, Andy explores new art techniques and becomes a major figure in the new genre called Pop Art. Andy's business grows to include mass production of his art creations as well as film production of counterculture or underground films. Andy's films center on mundane topics such as bathing, presented in obscure ways and star Andy's friends and the people who become his followers.

Andy's notoriety both in his work and in his lifestyle attracts other artists as well as celebrity entertainers who jockey for position in Andy's world. Most of the work and some of Andy's personal life is conducted at The Factory, Andy's warehouse filled with workers pumping out Andy's artistic pieces.

Andy eventually rises to superstar celebrity status himself and travels the world selling art, attending celebrity events, and just enjoying the notoriety he has achieved. In this book several people, both male and female, are named B, who act as counterpoints to Andy's sometimes being called A. This may be considered unusual to most people but Andy's world is esoteric and designed to shock so the reader should be prepared to hear almost anything. Andy does not disappoint.

More summaries and resources for teaching or studying The Philosophy of Andy Warhol.

The Philosophy of Andy Warhol from BookRags. (c)2022 BookRags, Inc. All rights reserved.