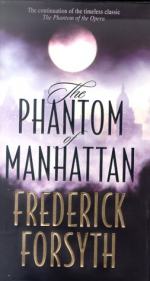 Frederick Forsyth
This Study Guide consists of approximately 53 pages of chapter summaries, quotes, character analysis, themes, and more - everything you need to sharpen your knowledge of The Phantom of Manhattan.

The Phantom of Manhattan Summary & Study Guide includes comprehensive information and analysis to help you understand the book. This study guide contains the following sections:

This detailed literature summary also contains Quotes and a Free Quiz on The Phantom of Manhattan by Frederick Forsyth.

The following version of the novel was used to create this study guide: Forsyth, Frederick. Phantom of Manhattan. Thomas Dunne Books, April 1, 2007. Kindle.

In The Phantom of Manhattan by Frederick Forsyth, when Antoinette Giry sends a letter to Erik Muhlheim on her deathbed telling him that he has a son, she sets in motion a series of events with both tragic and redemptive results. Not only is Erik redeemed when he learns that he has a son, but journalist Charles “Cholly” Bloom lets his compassion outweigh his desire for a story. Sadly, opera star Christine de Chagny is killed as a result of Darius’ greed, a murder that teaches that while love for other humans is the answer to everything, the love of money is dangerous to all involved.

Antoinette, chorus mistress for the Paris Opera, rescued Erik from imprisonment in a freak show when he was only a teen. Knowing that he would have no future in the public, Antoinette took him to the opera house to live in the basement. Erik fell in love with Christine Daae who was then just a chorus girl. Erik coached her singing until he made her a star but was devastated when she could not return his love. Another singer was unintentionally killed by Erik and the police came looking for him. Antoinette was the one who found Erik and snuck him out of the opera house. She bribed a captain to get Erik passage to New York.

In America, Erik partnered with a man named Darius to build rides and attractions for the fun fairs that were popular on Coney Island. The money they earned from these attractions, as well as other investments, soon made Erik a very rich man. It was at this point that Erik received Antoinette’s letter that he has a son by Christine. Christine had married Raoul de Chagny when she learned she was pregnant. Raoul knew the child was not his because a bullet wound had left Raoul unable to have children. However, Raoul had raised Pierre as his own son.

Erik had already invested in building the Manhattan Opera House but changed his plans to have Christine come and sing an opera that he would write the opening week. Darius noticed the changes in Erik and asks Mammon, the god of gold, for permission to kill Erik because he fears that his inheritance will be squandered on the opera. Mammon will not allow Darius to kill Erik at that point but tells him that if a credible threat to Erik’s wealth is discovered, Darius has his permission to take care of it.

Christine learns that Erik is behind the new opera house and opera in which she will be singing when a musical monkey is delivered to her hotel suite. She meets with Erik and he asks her to stay in New York with him. When she refuses, Erik asks her to leave him his son. Christine promises that when Pierre is 18 she will tell him who his father is. Erik does not want to wait that long.

The opera is a glorious success. Unknown to the audience, Erik takes the place of the leading male singer, a man who has suffered a facial disfigurement in the Civil War, in order to sing with Christine. Erik slips her a note after the performance asking her to meet him and let him see Pierre one last time before they return to France.

Christine meets with Erik as planned at Battery Park. Fearing for Christine’s safety, Father Joe, who is Pierre’s tutor, goes there as well. He is escorted by Cholly Bloom, a journalist whose luck has led him directly into the paths of both Erik and Christine multiple times. Cholly hides in the bushes to see what will happen. He watches as Darius also eavesdrops on the couple. Cholly says nothing until he sees Pierre run to his mother, but he is too late. Darius fires a shot at Pierre but instead of hitting the boy, hits Christine. Realizing what has happened, Erik shoots Darius dead.

As Christine dies, she tells Pierre the truth about his father. Pierre goes to Erik, removes his hat and mask, and then announces that he wants to stay in America with him. Erik is changed and begins using his money to help other people with facial disfigurements and fund charitable organizations.

Just more than 40 years later, Cholly, a journalism professor, gave his students a lecture in which he told them about his journalism career, including a story that he never covered. He says that if the editor of the newspaper had ever found out he held back on the story, he would have been fired. Cholly explains he chose not to write the story at the time because he felt those involved had already suffered enough and a leading story in the paper would only cause more harm and pain. Cholly ends his lecture with the story of Erik, Christine, and Pierre.

More summaries and resources for teaching or studying The Phantom of Manhattan.

The Phantom of Manhattan from BookRags. (c)2022 BookRags, Inc. All rights reserved.