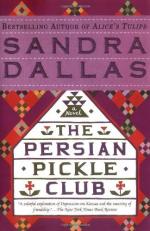 Sandra Dallas
This Study Guide consists of approximately 40 pages of chapter summaries, quotes, character analysis, themes, and more - everything you need to sharpen your knowledge of The Persian Pickle Club.

This detailed literature summary also contains Topics for Discussion and a Free Quiz on The Persian Pickle Club by Sandra Dallas.

This is the story of a group of friends in Depression-era Kansas tied together by shared interests in quilting, conversation, good food, and keeping secrets. As the narrative unfolds, following its central character through a series of both challenges and affirmations to her beliefs about friendship, it also explores themes relating to the dangers, rewards, and necessities for keeping secrets, to issues of ambiguous morality, and to the passing on of both truths and secrets to future generations.

The novel, narrated in the chatty and first-person voice of club member Queenie Bean, begins with a description of the welcome given to new member Rita Ritter, married into the family of two of the club's stalwarts. City girl Rita, accustomed to more sophisticated entertainments than quilting, is nevertheless made welcome by the various members of the Club, especially when she miscarries her first child.

The banding together of the women of the the Persian Pickle Club, whose name is derived from the local nickname for a particular quilting fabric, in support of Rita during and after the loss of her baby is but one example of how the bonds of friendship between the members of the club provide strength and support during times of crisis. All is not sweetness and light, however. The narrative also portrays the complex, at times confrontational, relationships between the various women, often triggered by the domineering Mrs. Judd and the sharp-tongued Agnes T. Ritter or Rita's sister-in-law. When push comes to shove, however, the women are there for one another.

As the narrative unfolds, the security of the women's relationships is challenged by two important incidents. The first is the revelation that the daughter of one of the club's members has become pregnant, outside of marriage, as the result of her relationship with a married man. Mrs. Judd, however, offers a possible solution to the situation, by suggesting that Queenie, who longs for a baby following a miscarriage that left her unable to bear children of her own, adopt the child. As the happily shocked Queenie accepts the proposal, the women promise to never reveal the truth about what will eventually become her child.

The second challenge to the women's friendships comes when the long-missing husband of club member Ella Crook is discovered shallowly buried in a field, murdered by a blow to the head. The ambitious Rita, eager to become a well known writer and desperate for something to do other than farming and quilting, decides to uncover the truth so she can write about it for the local paper. Queenie, who has decided that Rita is her new best friend, assists her in her investigations. At one point, as Rita is in the process of uncovering more and more secrets about the dead man's life and death, the two women are the victims of a violent assault, a situation Rita insists was the result of her coming too close to the truth about the murder. Queenie, however, remains convinced that the two events are unrelated.

With emotions running high, and as the Club has gathered for one of its regular weekly meetings, the highly strung Rita blurts out her suspicions about who was responsible for the murder. She believes that it was Mrs. Judd's husband Prosper. As Mrs. Judd defends her husband, Queenie finds the mounting tension between the members of the club and blurts out the truth that the club is responsible! In the shocked aftermath of her revelation, the club members led by Mrs. Judd explain that Ella was being frequently and viciously abused by her husband, and that one day, after he assaulted her with particular violence, one of the members of the club hit him on the head hard enough to kill him. When Rita asks who struck the blow, all the club's members except for Queenie conceal the truth behind a series of lies, continuing to keep the secret.

At the conclusion of the narrative, however, Queenie describes how she came to trust Rita's loyalty and confesses that she struck the murderous blow.

More summaries and resources for teaching or studying The Persian Pickle Club.